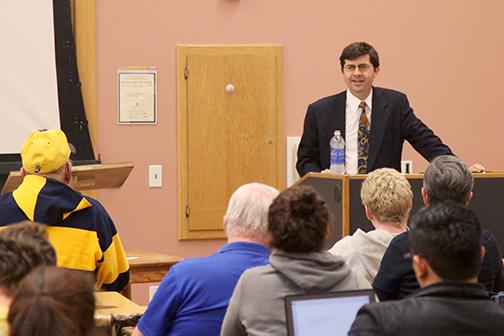 A New York civil rights attorney and author of “The Passion of Bradley Manning” gave a talk at San Diego State Thursday about the benefits of Chelsea Manning’s involvement with WikiLeaks.

Chase Madar gave a presentation titled, “Cluelessness, National Security, and Chelsea Manning: Why the Biggest Security Breach in U.S. History is Good for You.”

Madar’s main motivation for traveling to different universities is to educate people so they are able to make “well-informed decisions,” he said.

“I want to see lots of people that are interested … I want people to see the big-picture issues here,” Madar said. “It’s not leaks or whistle blowers that are getting 460,000 Iraqis killed and 4,500 Americans killed over there.”

Madar believes that had people in decision-making positions been informed, the outcome could have been much better.

“Knowing what your government is doing is really not such a bad thing,” Madar said.

He also said that he believes that knowledge isn’t going to hurt people and that Americans need to  “get over this fear.”

“You can find optimism in his pessimism, honestly,” Alhumaidan said.

He was particularly intrigued by what Madar had to say about the future and quoted him by saying, “Even though the road ahead is really hard, there is still a road.”

Business administration freshman Sylvia Ma said she hadn’t been exposed to the issue much, but was able to find a different meaning to the talk and learn more about Manning and the underlying issues regarding the leaks.

“I don’t believe that every citizen should know what is going on … I thought it was awesome hearing his point of view, and informing us,” she said.