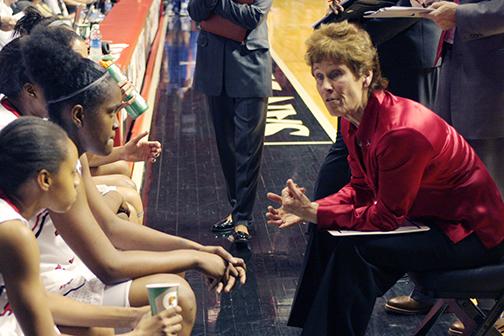 Burns retired in April with little explanation, provoking media speculation. Her retirement came nine months after she signed a five-year contract extension with the university. In 2012, Burns led the team to earn the Mountain West Conference Championship title, its second in four years with her as coach.

Now Burns and attorney Edward Chapin are claiming she was forced to retire or face termination because for allegations that she struck an assistant coach.

The claim states that on April 16 Burns was called to the athletics director Jim Sterk’s office. Sterk, along with SDSU Associate Vice President Richel Thaler and Senior Associate Athletic Director John David Wicker, claimed to have video evidence of Burns striking a subordinate. She was then given the options of immediate retirement, resignation, or termination, according to the claim.

In July, U-T San Diego showed video footage of a Feb. 13 game between the Aztecs and Colorado State University, in which Burns is seen twice making physical contact with ex-assistant coach Adam Barrett, while sitting on the sideline. In the first instance Burns slaps Barrett’s clipboard after a Colorado player makes a basket. In the second, Burns slaps Barrett’s upper arm after a successful three-point shot by an opposing player.

The U-T also uncovered a settlement for $250,000 paid to Barrett by the CSU Board of Trustees in June. The settlement does not mention the nature or the cause of the dispute between Barrett and the university. She was subsequently hired as the associate head coach of Saint Francis University women’s basketball team.

Burns’ claim states that the contact between her and Barrett seen in the video was unintentional and was made in the heat of a basketball game and that her actions were not malicious.

Burns and her counsel allege that the incident was used as a pretext to oust Burns for criticizing the university’s unequal treatment of the men’s and women’s basketball teams. The claim states that during Burns’ time as head coach, the women’s basketball team suffered from inadequate provision of equipment, travel funds and practice time and space.

In addition, Burns’ attorney alleges that a tentative job offer Burns received was rescinded after the prospective employer spoke with SDSU personnel.

In compliance with state law, the CSU has 45 days to send a response to the claim. Without a response or settlement within that time, a lawsuit can be filed in a state court.

Chapin said in an Oct. 23 telephone interview that he had not yet been contacted by anyone representing the defendants.

He also said he will not discuss the allegations in the claim with the media.