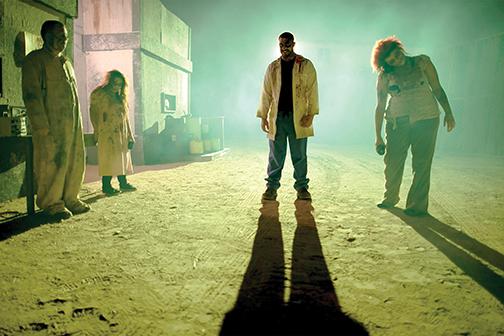 Ah, Halloween. The time for trick or treat, parties and plenty of mischief. It’s also a good time to go with friends to see the many different creepy attractions in San Diego.

Horror fans should check out The Haunted Hotel because the experience is dedicated to scary films. This year, there will be sections of the hotel based on “Evil Dead,” and even a dungeon inspired by “The Walking Dead.”

Balboa Park, one of the most picturesque locations in San Diego, is sponsoring its traditional, The Haunted Trail. The trail is an outdoor-only adventure, containing all kinds of spooky creatures. This year, they have a journey called The Experiment, which is an additional maze. Information about it online is vague, so be ready for a strange trip.

The Scream Zone Scaregrounds at Del Mar will once again include wild suspenseful activities. The Haunted Hayride has a self-explanatory title, and will take you to numerous locations, with plenty of zombies and even “The Hills Have Eyes.” The House of Horror also has new elements to experience, such as “Thir13en Ghosts,” Monster Attack and the Underworld. The Chamber is advertised as a nauseating maze with the longest spinning kaleidoscope tunnel in Southern California. That sounds really unique for those that can handle the intensity. The latest addition to The Scream Zone is Zombie Paintball Safari, in which players have to shoot dangerous members of the living dead. Has paintball ever been so frightening?

No matter which location you visit, these terrifying sites will provide a freaky time for brave souls. Aztecs, get ready to scream your heads off.