CSO Program adds 16 to the team 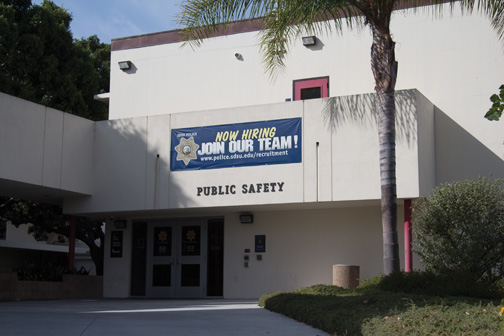 The CSO Program has come a long way since its enactment in the late ‘80s. The student CSOs are able to provide escort services, receive extensive training and ultimately learn professional skills  they will be able to use after graduating from SDSU.

The bike patrol sector, which is slated to begin this month, will be used to prevent crime on campus, Auxiliary Services coordinator and CSO Program Director Shawn Brown said.

The new hires will also be used to start a new bike patrol squad on campus.

“Our current captain, Josh Mays, established the CSO law enforcement training, which is probably one of the most unique trainings in any university in the United States,” Brown said.

“Coming from where I did and where I am now, I was able to make the changes I wanted to see made as a student,” he said.

These trainings are given twice a month. CSOs learn all the tactics involved with arrests and how to act in situations that police officers often find themselves in. After learning everything within the training, the CSO is then tested on it in front of police officers. The trainings are similar to a police academy, something every police officer must go through. However, CSO programs at other universities don’t provide the same type of training as the SDSU CSO program.

In addition, the CSOs take defensive driving classes, which allow them to operate the Red and Black Shuttle that provides transportation for students around campus. They also serve as the “eyes and ears” for the SDSU Police Department.

“We help with numbers, we are able to be all over the place … having an additional seven CSOs looking for suspicious activity … I think helps in getting a timely response and help deterring crime, since we have a direct connect to any police officer at any time,” criminal justice senior Andrea Villa said.

Villa, who was promoted to supervisor three months ago, said her favorite part about the program is the exposure to actual police officers.

“Being able to pick police officers’ brains apart about what they like about the job and what are the difficulties,” Villa said.

She added it helps her prepare for her future career in law enforcement.

To apply for supervising positions, applicants must fill out a 35-page application and CSOs must submit letters of intent. Brown said this helps students understand professionalism.

Economics and international security and conflict resolution junior Hunter Price said that submitting letters of intent has helped him learn how to act and write in a skilled manner.

“(When applying for a job) businesses take this seriously because working for a police department takes a lot,” Price said.

Price became a CSO as a freshman and was promoted to supervisor at the end of the year.

The CSO program is accepting applications. Those who are interested can go to dps.sdsu.edu/recruitment.htm for more information.

Students who feel unsafe walking to or from parking structures are encouraged to call 619-594-6659 for escort services.