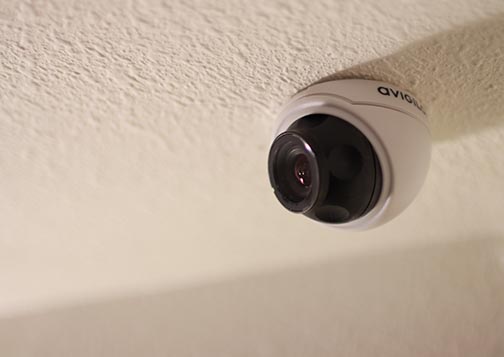 According to Office of Housing Administration Director Eric Hansen, about 60 surveillance cameras will be installed across all of the on-campus residential properties.

Hansen said the majority of cameras will be placed in the elevator cabs and landings of each floor.  Cameras will also be located in Students Taking Academic Responsibility resource centers and recreation rooms, along with cameras on the blue-light emergency stations near the residence halls.

“We have occasionally had people in the halls who have violated various university policies, laws or damaged the facilities,” Hansen said. “With our desire to do what we can to mitigate any harm to our students and our physical assets and we wanted to continue the video camera installation started in Tenochca (Residence) Hall several years ago.”

Hansen said the cameras will not be placed in private areas, such as restrooms and personal rooms.

“To ensure personal privacy, cameras are located and record data only in areas that are considered public to those authorized within the residence halls,” he said. “While many of these areas are off limits to non-residents, they are areas where people would not expect to be private.”

Hansen said the footage will not constantly be monitored, but will be used if an issue arises involving alleged criminal activity. The recorded footage will reviewed by the San Diego State University Police Department, who will use it to help with investigations.

“We would use (the footage) if there’s an allegation of an incident,” SDSUPD Lt. Josh Mays said. “We would use it as an investigative tool, along with other resources.”

However, not all students and resident hall coordinators believe the cameras are necessary.

“I think we do a pretty good job of monitoring who comes in and out of the dorms so I feel to put security cameras everywhere would be a little over the top because we haven’t had that serious of incidents where I feel it would be necessary,” Resident Advisor Allyson Serafico said.

Some students feel the current security systems in place within dorms is enough to ensure safety.

“I think (it’s) kind of weird, because they’re already really tight on security and monitoring us,” Cuicacalli Suites resident freshman Taylor Grau said. “I feel safe anyway, because you already have to get through so much just to get inside the dorms.”

According to the email sent to residents, the installation is part of an ongoing project of the university.  Residential Education, University Police, Business and Financial Affairs, and Student Affairs also took part in the decision making process, Hansen said.