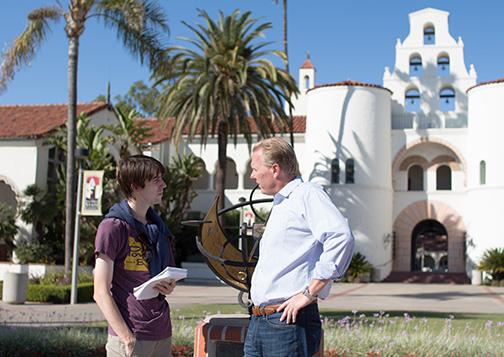 The Aztec: What would you do to improve transparency in San Diego City Hall?
Kevin Faulconer: A big push is on open data, which is making sure that we have a lot of the city’s information actually posted online, so everybody, any San Diegan, can go online and see what’s happening and what’s going on. I’ve made a specific effort when I’ve talked about, in terms of just from a government standpoint … making sure that we have as much openness and transparency, not only in just all of our meetings, but being up front and honest with San Diegans about the challenges that we’re facing. I’ve been on the council for a number of years and I think that’s one of my strengths, which is being up front about the issues that we have to solve and make tough decisions to do that. When I first got elected we were right in the midst of a huge financial crisis in the city. You can’t sugarcoat it; you have to be up front and honest with people. And so that type of openness starts at the top at the mayor’s office and that’s one of the strengths that I’m going to continue to do.

TA: How would planning changes initiated by Planning Director Bill Fulton be affected with you as mayor?
KF: We’re planning on working hand in hand with Bill. He just got brought in and he’s actually a real expert in the field. His hire was a good one for the city of San Diego. I’m already working with him closely as we look at particularly updating our community plans, which is our blueprints for how communities develop and grow into the future. Keeping in mind we need to do it smartly, particularly around transportation corridors. So families, students and people can have options. They don’t have to just get in their car on housing developments. And so that’s a big push for us: Smart growth. But also making sure that we have the amenities that go with that in terms of our parks, our recreation centers and our libraries.

TA: If you were only able to make one specific change or complete one project as mayor, what would it be?
KF: Continue to get us back on track financially. That is one of the most important things that we’re doing so we have the dollars to reinvest into our neighborhoods. Street repair, putting cops on the street. Making sure that our parks are open and clean. Hiring more police officers. That financial stability, which this city was very much in jeopardy seven years ago, is something I’ve worked on a lot. And we have to have a mayor that understands how important that is and stays the course.

TA: What would you do to attract more high-skilled jobs to San Diego for college graduates?

KF: I encourage everybody to go on my website, kevinfaulconer.com, and read my ideas plan. And I talk a lot about several factors. But first of all, investing in the companies and the industries that we do have here, the local jobs, that we have to grow those jobs. But I have a real focus on, particularly from the technology situation, is technology incubators, which I have helped in my own office budget. We have a great example of a program downtown called EvoNexus. These are sharp, bright, often times very young people right out of college. Helping to put them in touch with capital and help start their companies and their ideas. And that’s the whole thing, is to grow these companies from the ground up. And so small companies become big companies. We have some of the smartest talent in all of the country right here in San Diego. And as a proud San Diego State Aztec I know that (we) have some of the sharpest minds in the entire city right here at San Diego State. I want to make sure we’re doing everything we can to develop new jobs so when people graduate they can go in and have high-paying, high-level, high-skill jobs that are local San Diego companies. I’m going to continue to make sure that we’re fostering new companies that we’re proud of right here in San Diego.

TA: Any messages you would like to send to SDSU students?

KF: I’m so proud of this university and what it meant to me and my life and the friendships and the connections that I’ve made here on campus I keep with me to this day. I received a first-class education here. I’m very proud of the work that I did here … particularly in Associated Students. I’m a strong supporter of this university and can’t wait to … continue that support when I’m mayor.
TA: Neighborhoods have been an important issue in this election. If elected, how would you balance your support from business and building interests with you stated commitment to improving neighborhoods?

KF:  Yeah, it is an important balance. I’ve spent so much of my time on the council … focusing on neighborhood issues. And so I think when people look at my experience and how I’ve backed that up since I’ve been on the council, I have a strong track record of making sure that we’re spending money in our neighborhoods, particularly on street repair. I developed the Mission Bay Park initiative once I was on the council because the City Council was stealing funds from Mission Bay Park. As a mayor I’ll have the opportunity to not just focus on the council district, which I’ve been proud to represent for a number of years, but take that experience citywide.

TA: One of your supporters, the Lincoln Club of San Diego, recently released a controversial ad against your opponent, Nathan Fletcher. Will you endorse or reject that ad now?

KF: You know, we can’t control anything that these independent expenditures do. And so I’ve been focused on my campaign on a very positive message, and I think that’s what people want to hear and I will continue to do that.

TA: After the Bob Filner scandal that went national and tarnished the reputation of San Diego in the eyes of the nation, what are you going to do to restore our image to the nation and to the world?

KF: San Diegans need a mayor that they know and they trust, and I’m going to bring that credibility, having served in the council for a number of years. They know who I am; they know what I’ve been fighting for to move this city forward. Bob Filner took this city backward in a very short amount of time. We knew when we were being put through what he put us through that we were better than that as San Diegans. We have a great deal of pride in our city, and I’m going to make sure that that pride shows through City Hall. My strength is bringing people together regardless of whether you’re Democrat, Republican, Independent; it’s all about putting San Diego first. That’s what I’ve been known for since I’ve been on the council and I think that’s exactly the type of person we need as mayor and why I’m so excited to do the job.