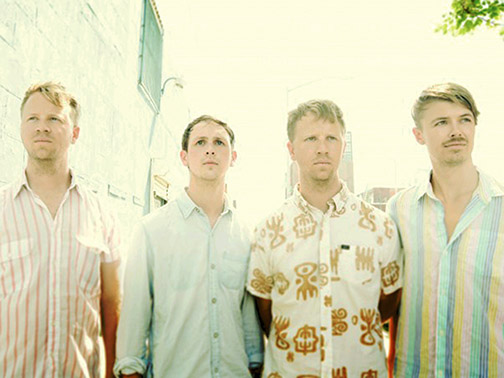 Indie band Cayucas started out as musician Zach Yudin’s  solo project. Later, he got his brother and friends to form a full group. The band’s music is as sunny and cheerful as the California city the band derives its name from. Cayucas is touring to promote its fun debut album “Bigfoot,” and the band will be performing in San Diego on Nov. 23 at The Loft. The Aztec chatted with Yudin about the new album and the band’s live performances.

The Aztec: How has touring been?

Zach Yudin: Touring has been cool. We’ve been touring on and off for the past six months now. We left Los Angeles on Aug. 15 to tour middle America and the east, and then to Europe. We just got back.

TA: Did you write the songs with a band in mind?

ZY: In the very beginning, I thought I could perform the songs myself. But I also had the thought that (Cayucas) should be a band because I thought it would sound better live if it was played by a full band. I could potentially perform the song by myself but it would be very niche; it would be a certain type of indie sound. I wanted it to be a little bit more relevant than just an indie project, so I thought I needed a full band.

TA: Were there any specific moments of your life you were tapping into while writing your songs in “Bigfoot?”

ZY: The whole album has a nostalgic feel. A couple of songs I wrote were based on funny, interesting childhood memories, and that turned out to be the theme of the album. I like writing something other than the stereotypical high school experience or summer camp experience. I think of the funny thing that happened at camp, something that was totally different. That turned out to be unique and easy and fun to write a song about.

TA: How did the band come together?

ZY: My brother plays the guitar, but he said he’d rather play bass. I ended up playing with a few guitar players and reaching out to a couple friends. I jammed with a couple different people and the band formed like that. Living in LA, I have a couple of friends who are well connected. My drummer Casey (Wojtalewicz) was actually in another band I knew.

TA: Do you have a different approach to playing your songs live with your band?

ZY: Yeah. On the record, we didn’t spend a lot of time recording electric guitar. Live, we play a lot of electric guitar stuff than what you might catch on the new album. It’s more full ground. We added and changed a couple of melodies. We added an outro to a song, an epic ending. We added this long jam. We tweaked it around live so it can be more of a show.

TA: Will any of those jams be included in your new material?

ZY: I don’t know, actually. That would be cool on an album, sort of a psychedelic thing. I can try something like that.

TA: Any plans after touring?

ZY: We will be taking some time off in December to hopefully do some writing for the second album and little bit of recording. In 2014, we will see what happens, but we will do more touring and hopefully some festivals in the summertime. Hopefully, there will be some new stuff.

Also read: Mood Rings will keep it mellow at the Irenic