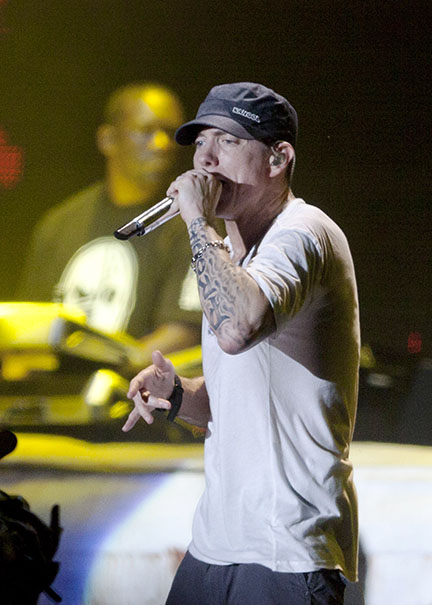 Celebrity of the Week

Rapper Eminem was awarded the Global Icon award at the MTV European Music Awards in Amsterdam on Nov. 10. Eminem was presented the award by “Anchorman’s” Ron Burgundy (Will Ferrell) after performing his hits “Berzerk” and “Rap God,” according to the PerezHilton website.  The Detroit native has won more EMA’s than any other artist.

Also in Amsterdam for the MTV EMA awards were Miley Cyrus and English model Cara Delevingne. The famous duo spent some time in the city’s infamous red light district where photographers spotted them going into the Greenhouse coffee shop Friday evening, according to E online. Cyrus must be a fan of the coffee shop as she was there the night before with DJ Afrojack.

While in the U.S., actress Blake Lively made a special visit to the White House last Friday to speak with high school students about what it’s like to work in the film industry, according to PopSugar. Other celebrities in attendance included Whoopi Goldberg, Naomie Harris and producer Harvey Weinstein.

According to Eonline, Drew Barrymore and husband, Will Kopelman just announced they are expecting their second child. After making this exciting announcement, the couple was seen at the Baby2Baby red carpet event where they flaunted their happiness by posing and kissing in several photos. The couple has made it clear that they want to keep expanding their family and give their daughter, Olive, more siblings to play with.

1. This Hollywood heartthrob who “Stepped Up” to marry his co-star Jenna Dewan is currently working on several upcoming movies, including “22 Jump Street” that is set to hit theaters in the summer of 2014.

2. This actress is known for being bold, brilliant and beautiful, as she was named “the most powerful woman in the entertainment business” by Elle Magazine. She played the role of the fierce heroine in the first “Hunger Games” and stars in “The Hunger Games: Catching Fire” that hits theaters this month.

3. This star first appeared on “The All New Mickey Mouse Club” as a child and later became the youngest member of the boy band ‘N Sync. Since then, he has become a well-known independent singer, as well as an incredible actor who is known for his roles in “The Social Network,” “Friends with Benefits” and his most recent movie, “Runner, Runner.”

4. This singer-songwriter first pursued a career in gospel music. When that proved to be unsuccessful, she decided to change her last name as well as completely shifting into a different style of her music. The first single she released under her new image was titled “I Kissed A Girl.” This song, although controversial for the young singer, was ultimately responsible for her breakthrough.

5. This Australian actor followed in the footsteps of his two older brothers, Luke and Chris, by pursuing a career in acting. He is best known for his leading roles in “The Last Song” and “The Hunger Games” trilogy. His on-again, off-again relationship with Miley Cyrus is said to have finally come to an end as the couple decided to call off their engagement.