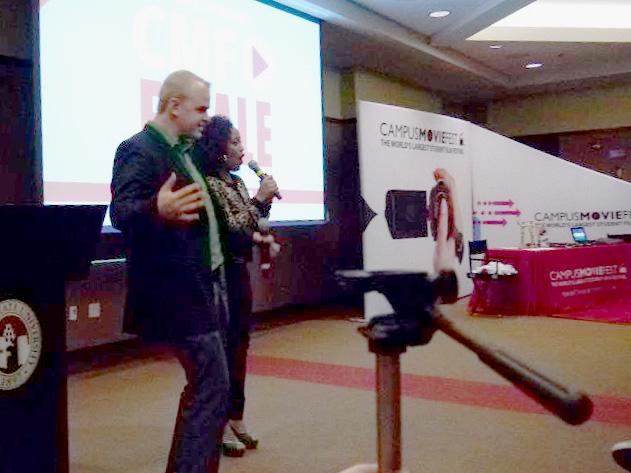 Campus MovieFest will be screening plenty of original storytelling this weekend. Provided with camcorders, laptops and editing software, students were challenged to create the best short film here at SDSU in just one week. The winner from San Diego State will continue on to compete on a national level. CMF began in 2001, and SDSU has been competing since 2009. Since its introduction, more than 500,000 worldwide students at colleges and universities have been given the resources and training necessary to tell their story on the big screen. The films will be screened right here on campus, so come join in on the fun on Saturday, Nov. 23 at the Parma Payne Goodall Alumni Center.

If you haven’t heard the buzz around campus, Drake is coming to town. Starting at 7 p.m. this Sunday, Nov. 24, Drake along with Future and Miguel, will be arriving for a special night with the Aztecs. Nov. 24. With the release of his new album, “Nothing Was the Same,” Drake has been touring North America and he is ready to put on a show for SDSU. Tickets went on sale late June, so hopefully you’ve already grabbed a pair. We hope to see all of you Aztecs at the show for one of the biggest performances at SDSU this year.

On Saturday, the Mingei International Museum in Balboa Park is hosting its second annual holiday open house to follow the success of last year’s event. The folk art museum will be offering holiday-themed events and goods while you check out the exhibitions currently on display. A diverse selection of unique crafts, textiles and furniture is at the museum, and one of the exhibitions, the “Dia de los Muertos-Day of the Dead Altar” is coming to an end soon. Artist Kathy Miller is scheduled to arrive at 11 a.m. to create art using Japanese calligraphy books. The museum also invites attendees to create their own work in its Folk Art Studio. Take some time to get into the craft of folk art for the holiday season.

The Locust at Porter’s Pub

The members of The Locust may look a bit odd in their full body nylon suits, but know this: this San Diego four-piece knows how to wreck the stage. The Locust plays furious, noisy punk rock music with a dirty, rough sound. The rhythms of the music are complex without losing its speedy momentum.  The band has been quiet since its last studio album “New Erections” was released in 2007, but recently returned to perform shows, most notably at FYF Fest earlier this year. The Locust will be performing at Porter’s Pub this Saturday, supported by Widows and Bastard Noise. The price is $15 to experience The Locust and its fearsome punk rock fury.