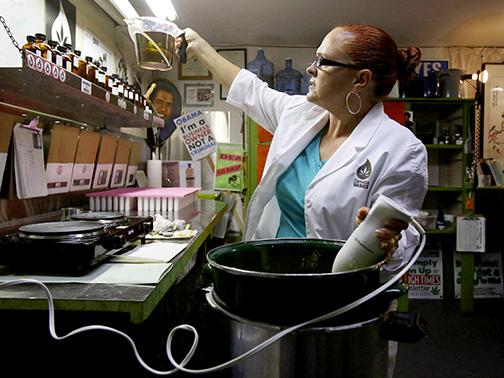 Aimee "Ah" Warner, CEO and founder of Cannabis Basics, cooks up a batch of topical medications for pain relief, all legal, September 20, 2013, in Seattle. She has convened a group called Women of Weed because the marijuana industry and movement have long been male dominated. (Alan Berner/Seattle Times/MCT)

During San Diego’s special mayoral election, it seems as if every question possible is being put on the table. One particularly hot topic in San Diego is the regulation of medical marijuana.

The status of medical marijuana in San Diego has not been consistent, leaving many citizens to question what the future holds for medicinal users. The Compassionate Use Act, also known as Proposition 215, allows for the medical use of marijuana by patients who have been prescribed or recommended to use the drug by a doctor. California voters passed Proposition 215 on Nov. 6, 1996; however, because of conflicting federal laws, the lines have been blurred.

The Compassionate Use Act looks to provide medical treatment to patients who are looking for alternatives to prescription drugs, such as painkillers or sleep aids. Unfortunately, when the act was passed it left the regulation of dispensaries up to local law enforcement with no clear standards of what was acceptable and what was illegal, leaving the city in a rut of regulation. Medical marijuana dispensaries began to show up in neighborhoods, near schools and close to churches. The sudden surge in presence of dispensaries, as well as the location of particular shops, left some citizens feeling uncertain about these businesses.

While in office, former Mayor Bob Filner instructed police and code enforcement officers to lay off medical marijuana dispensaries. He was a vocal advocate for medical marijuana, and helped to lead the U.S. Conference of Mayors to agree that the federal government should allow states to adopt their own marijuana policies. Filner wanted to set his own guidelines for local law enforcement. By laying down local policy, he would be able to cut down on the confusion that misleads police officers on a day-to-day basis.

Since Filner resigned from office, Interim Mayor Todd Gloria has stepped in and attacked local dispensaries. Even though his term is only temporary, Gloria’s abrupt decisions highlight the importance of this issue once again. Where will San Diego’s next mayor take this issue?

Kevin Faulconer, who currently leads the polls, is the only candidate who took the opposing side at the KPBS debate on Oct. 14. He stressed the priority of families and schools over medical dispensaries throughout the city. He claims that patients need compassionate care, but that he will always put San Diego’s neighborhoods first. While Faulconer is claiming to be the opposing candidate on this issue, his answer regarding a plan for the future sounded similar to those of the other candidates who support the issue.

City Councilman David Alvarez seems to be the clearest supporter of medical marijuana, and of those who depend on it for their illnesses. Alvarez wants to fix the problem of clustered dispensaries by dispersing them evenly throughout the city. By evenly dispersing dispensaries, excessive foot traffic would be eliminated in certain areas, while also making it easier for patients throughout San Diego to obtain access to their medicine.

Former California state assemblyman Nathan Fletcher shares Alvarez’s progressive stance on marijuana policy in the city. He also feels that dispensaries are too heavily concentrated in certain areas, and that needs to be fixed. Citizens do not want dispensaries surrounding their children’s schools and neighborhoods. Fletcher has stated that he wants to work to find a solution that keeps our families safe, but also accommodates the needs of patients.

The needs of the patients are a concern for Mike Aguirre as well. But while he said he is a supporter of medicinal marijuana, Aguirre is concerned with those who are possibly misusing their privileges. The concern of medical marijuana being misused by patients is not a new issue, but as of right now, nobody besides a licensed doctor is qualified to say who’s misusing their privileges. Aguirre’s efforts may be better used tackling the issues already on the table that are of the most concern to local citizens.

Whether you are a user of medical marijuana or a parent who has children here in San Diego, the issue pertains to you. It’s important that the next mayor recognizes the balance that needs to be found between both parties. Medical marijuana may not be the most trending topic on the list of issues being tackled by mayoral candidates, but it undoubtedly should be on the minds of potential voters. Medical marijuana is an emerging industry, and in years to come it is expected to progress even further. The medicinal use of the drug is a prominent issue now, so I can only imagine how statewide legalization of marijuana would add further complications. With this in mind, our next mayor needs to be thinking a few steps ahead of the rest.