Screaming Females blows away the crowd 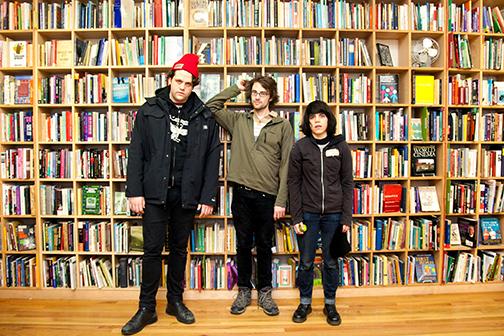 Last Saturday, New Jersey punk rock band Screaming Females performed at the Soda Bar, supported by tour mate Upset and San Diego band Sledding With Tigers. The openers, Sledding With Tigers, started the show with a fun vibe, cracking some jokes in between sets. The atmosphere in the venue felt casual as members from the billed bands were seen hanging out around the bar. The musicians blended in with the crowd as if they were bar regulars instead of members in a touring band.

The small venue didn’t stop Screaming Females from playing with an explosive energy. Front woman Marissa Paternoster was the one to watch on stage as she performed some furious guitar playing throughout the show. As the tunes went into a guitar solo section, Paternoster ripped through those with ease. Paternoster’s vocals were equally powerful as she sang with a chilly howl along the rough blues.

As loud and aggressive those guitar riffs were, the band also had a good groove to follow along. It didn’t hurt that Paternoster’s guitar melodies were simply catchy either. Screaming Females played songs suited for both humming along and banging your head to the music. The crowd was doing either of the two, and some were even dancing along.

While Screaming Females played wild punk music, the members of the band looked relaxed on stage. Paternoster played intense solos nailing them without even breaking a sweat. Michael Abbate (a.k.a. King Mike) nodded along to his bass lines, while drummer Jarrett Dougherty kept it loose with his drums.

The energy in the venue only went up as it progressed and the band finished at its peak. Screaming Females gave little time for chat in between songs and quickly continued into the next song to keep the momentum. When the band reached its final song of the evening, Paternoster made her announcement for the end brief and kept on going. There was no encore, but Screaming Females left everybody wanting more. Hopefully, the band will pick up where it left off with its recent single, “Ancient Civilization,” for more new material and return to San Diego sometime soon.