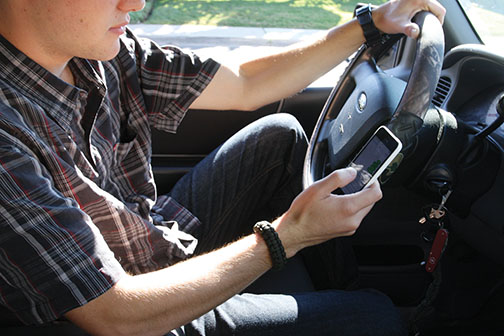 State Farm, an insurance company, recently released a study revealing more motorists are accessing the Internet while on the roadways than ever before.

The biggest jump in older drivers owning smartphones was in the 40 to 49 age bracket, with 47 percent in 2011 and 82 percent in 2013. According to another study from Pew Research Center, 56 percent of American adults own smartphones.

The State Farm “Distracted Driving” survey was conducted from 2009 to 2013, obtaining responses from approximately 1,000 U.S. drivers each year. Participants were 18 years and older and claimed to have some insurance and financial responsibility for their household, according to a State Farm press release.

“Social media and cell phone technology has been spread throughout the population and has now reached a critical mass,” Nee said. “It used to be skewed toward the younger people, but now older people are just as comfortable using it and probably getting addicted in similar proportions as well.”

Nee said people use smartphones while driving because of “the fear of missing out.”

“Because we can get these messages so instantly, we feel that we need to respond instantly, which isn’t always the case,” Nee said. “We are afraid we are going to miss something, but we forget about the days when nobody had cell phones.”

A random sample survey of 50 students taken on Nov. 22 at SDSU revealed 62 percent use their smartphones while driving.

The traffic division of the San Diego Police Department revealed more statistics regarding distracted driving incidents in the San Diego, with studies conducted in 2012 and 2013.

Strictly examining the period between January and October in 2012, there were 3,605 crashes resulting in injuries, 263 of those involving young drivers (20 and younger) with one fatal crash. Between January and October this year, there was a decrease in the crashes involving injuries with 3,432 reported, but a significant increase of 40 percent amongst younger drivers with 367 crashes. There were four fatal crashes this year amongst younger drivers, an increase of 300 percent, McCullough said.

Though the primary cause of almost all of the crashes involving younger drivers was speeding, McCullough said many also involved some sort of distraction.

Child and family development sophomore Jessica Torres shared her thoughts on the statistics.

“It’s a little scary,” said Torres. “Personally, I don’t use my phone while I drive so I’m being cautious for myself but who knows who else is using their cell phone, maybe even the car in front of you, you never know.”