Body modifications are a healthy form of expression 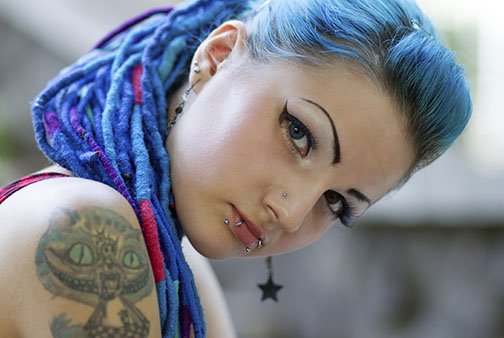 Tattoos and piercings have been around for thousands of years, but it seems they have recently grown in popularity among young adults. I have contemplated when and where I will get my tattoo. It has become somewhat of a coming-of-age gesture where you’re not officially independent until you brand yourself in some way. Piercings and plugs have become so common that I no longer cringe when I see earlobes dilated to an extreme level. Although body modifications mostly end there for most of us, some individuals take it several steps further.

Dennis Avner, widely known as “Stalking Cat,” is no stranger to extreme body modifications. He has undergone extensive facial changes to resemble a tiger, his totem animal. He has gone as far as adding whiskers to his upper lips, filing his teeth into points and tattooing his entire face to resemble tiger-like patterns. His changes have received so much attention that he scored a spot in Ripley’s Believe It Or Not! museum as well as a few documentaries. Although this extreme transformation is rare to come across, those who have at least seen pictures of his face are more horrified than impressed. Others who have followed in his footsteps include Erik Sprague, aka The Lizardman, and “the world’s most tattooed person,” Lucky Diamond Rich.

People such as these may be compared to circus freaks. However, years ago it was understandable why people with body modifications were put into sideshows. Back then our culture wasn’t ready to designate this behavior as socially acceptable. We lived to mingle with the familiar and ridicule the unfamiliar. Today, you would assume that we have evolved enough to finally look pass the outer layers, but what we have done is recycle old ideas of discrimination. We showcase the weird and unusual but put a mainstream spin on it to deem it acceptable. Now there are museums, TV shows and documentaries dedicated to body modifiers, as if they were a whole separate species.

I may not want to tattoo my face or pierce any part of my body other than my ears, but that doesn’t mean whoever does the reciprocal is a freak. We all tend to alienate the different and act as if they are inhuman. We like to look at extreme body modifiers as nothing more than an exhibit. The person gets lost within this obsession of abnormality that we all love to feed into as long as we’re not the objects of ridicule. This mindset pushes our progressive society back. Just because someone is tattooed or pierced doesn’t mean they are unqualified to function in the world. It’s a subtle form of discrimination that we seem to gloss over.

The work area is most notorious at scoffing at anyone who isn’t clean cut. In general, anyone who has some sort of change done to their body has to make sure that it is either hidden or socially acceptable. However, who are we to say what is acceptable or unacceptable? We should have the right to express our artistic sides without feeling as if we have to stay within arbitrary social boundaries. The problem isn’t that we don’t have the right to expression, but how our society doesn’t allow individuals to do so without risking social isolation or damaging their job opportunities.

Many people’s artistic abilities are hindered because our communities aren’t very good at accepting abstract ideas. Body modifications are just the tip of the iceberg when it comes to social acceptance. Some say we’re allowed to express ourselves, but once someone pushes the envelope, we feel as if it’s our duty to criticize and opinionate. It’s time we stop using our differences as an excuse to get to know each other. Some people say we need to treat our bodies like temples. Well if that’s the case, isn’t it our right to embellish it to fulfill our individualistic needs? Personally, I would rather have a temple enhanced with unique art than one that is ordinary and plain.