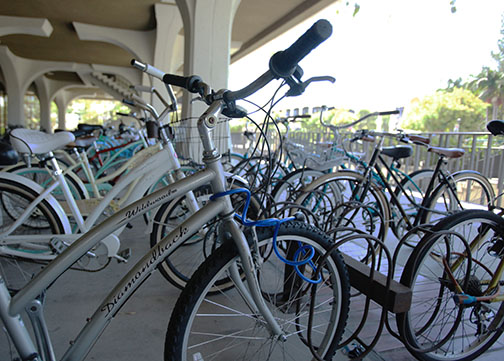 Beginning Jan. 1, bicycles locked to rails and poles will be impounded, and owners will be charged a $50 impoundment fee, according to the email.

According to SDSU Police Department Parking Administrator and Director of Auxiliary Services Debbie Richeson, the new fee is part of an effort to both increase safety and increase funding for alternative modes of transportation.

“This is the first semester I’ve gotten many complaints from students and Student Disability Services that they’re having difficulties around campus,” Richeson said.

The policy was approved by both the university president and the Campus Fee Advisory Committee which is the standard procedure for all proposed fees, Richeson said.

Morse, who is a CFAC committee chair, said the new policy is an effort to promote safety.

“It’s dangerous to have bikes locked up on rails,” Morse said. “We need to remain mindful of those of us who rely on hand rails. We noticed we needed to inform where people can put their bikes.”

The bike impoundment fee will accompany the increase of other parking violations around campus.

The new policy will create funding for free U-locks for students who register their bikes with the school.

“Most of the bikes that we see stolen on campus do not have U-locks on them,” Richeson said. “They have the cable, so that’s one of the reasons why were giving those out for free to students who register.”

After hearing about the new policy, students expressed concern that there would not be enough space to park bikes on campus.

“You can go to (Chapultepec Residence Hall) and easily see there is not enough room,” kinesiology freshman Edgar Jimenez said. “The bike racks are always so full, so many of us lock our bikes up on the chain-link fences. It’s ridiculous the school wants to enforce this new rule without providing enough space in the first place.”

“If there aren’t enough spaces, I would stop riding my bike at school,” Cobb said. “It would be a major inconvenience because I bought a bike for school.”

Plans for implementing additional bike racks include several campus areas, primarily focusing on the Love Library and Hepner Hall area. The new bike racks will be the more efficient “wave style” racks. There are approximately 50 additional bike racks to be installed, which will equate to more than 300 parking spaces, Richeson said.

“We’re trying to get the wave bike racks where they’re heavily used and trying to get rid of the old-school style,” Richeson said.

Once impounded, bikes will be taken to a parking facility and can be redeemed once student provides proof of fee payment, Richeson said. Citations may be paid at the Parking Services office on campus.

Get in on the discussion about the pros and cons of bikes on campus.