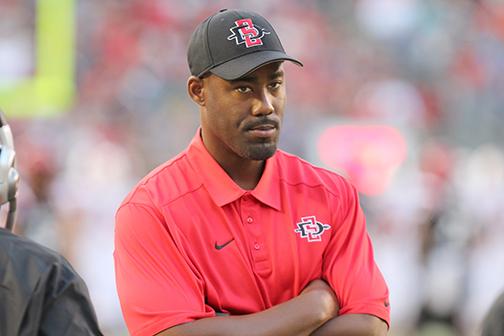 The plane did rounds in the air—the passengers were completely unaware that they were flying in circles to avoid landing on a private airstrip. The University of Colorado at Boulder football team was on its way to an away game when the plane arrived early, but the private buses weren’t there yet.

Rather than deal with a rambunctious university’s football team stranded at an airport, the former director of football operations made a call to suspend the plane in the air until the buses arrived.  Jashon Sykes is no stranger to pressure, bringing his prowess under pressure.

Sykes, a former professional football player and student athlete, joined the Aztec football team’s administration in Spring 2013 as the director of football operations. He remembers the exact day he moved back to California after living in Colorado for more than nine years. On Feb. 6, he brought his wife and three children to San Diego, and the school gained an experienced and levelheaded administrator.

Sykes stands at 6 feet 2 inches. In life he seems even taller, and can be an imposing figure. Wearing a silver athletic polo, black slacks and sporting a meticulously styled thin mustache, Sykes is clearly athletic, easy to talk to and personable. It’s no surprise to find out he was a defensive linebacker who played and started for the Denver Broncos before signing to the Washington Redskins.

During his career with the Broncos, Sykes started 11 games and recorded 63 tackles, recovered two fumbles and one blocked punt for the fourth-ranked defense in the NFL at the time, according to the University of Colorado website.

His experience in the NFL makes him a favorite among the team, players and staff, who have to go through him for all administrative needs.

Aztec senior wide receiver Dylan Denso enjoys talking to Sykes on a football level.
“He is very open and easy to communicate with, being he was also a former football player,” Denso said.
But Sykes didn’t always see himself on the administration side. Like many professional football players, he originally saw coaching in his future. But after his contract with the Redskins ended, he had to make a major life decision.

This choice Sykes made led him through many ups and downs, which included working for free for months while he waited for a position to be created for him.

“Every year I worked my way up to a better role with more responsibility,” Sykes said. “Probably by my third year in administration, I decided it was what I really wanted to do. I like to be depended on—I like to be in charge of something.”

As the director of football operations at SDSU, Sykes is in charge of all the background work that goes into transporting and feeding a team of 115 athletes. This includes drug tests, NCAA contracts, incoming freshmen meal plans, roommate assignments, hotel bookings and a plethora of other duties. This February, he flew out to the locations of the upcoming season’s away games and began booking hotels and shuttles, six months in advance.

Instead of flying with the team, Sykes heads out early to make sure all arrangements are set up to the team’s standards. He must account for the players and their support team, consisting of people from coaching and medical to press and everything in between.

“If it has anything to do with football, I somehow have my hands tied into it,” Sykes said. “My job description is hard to define.  I wear many hats.  I turn the lights on when they practice late. I have even taken out the trash. I’ve done it all.”

Fiercely loyal to his team, imaginatively creative and extremely dedicated to his work, Sykes’ colleagues agree he is a great addition to the administrative team.  LeCharls “Coach Mac” McDaniel, the wide receivers assistant coach, thinks Sykes is a determined and hard-working director.

Sykes has found that while working so closely with the team, he experiences the same emotions the coaches do. He gets the same highs from winning a big game and feels the same lows that come with losing.
“You do it all to win games,” Sykes said. “When you win games, that’s when you get raises; that’s when you get extensions. The life around campus is different. Winning affects a lot of people, and it affects a lot of things in a positive way.”
While victory is the main goal of any sport, it puts a fair amount of pressure on the college football players. Remembering the stress of being a student athlete himself, Sykes believes that players don’t always get the credit they deserve.

The day of the average student football player begins at 5 a.m. with weight lifting. They then continue with the rest of their daily tasks. By the time they get to class, student athletes have already been up for five hours.

“Maybe that’s why we seem like we don’t care in classes; we’re just tired,” freshman linebacker DJ Hunter said. “Some people look at us as dumb when we only go to school to play football, and that’s not at all what we do.”

While the pressure might be great, football certainly has a major impact on Sykes’ life, and he believes it’s all for the better. Part of the reason he can relate to the players is because he recognizes the life lessons learned while playing football. Sykes often gives them advice about reaching their goals.

“That’s one thing I love about sports, it teaches you to be competitive; it teaches you to be a go getter,” Sykes said. “Just go get it. Find your goal, find your task, go get it. Success is out there for everyone and it’s all on how you approach it. The easiest thing is to say it’s too hard and not try to achieve or accomplish it.”

Sykes is now well into his first year at SDSU, and he’s hoping for longevity. As he told U-T San Diego, he hopes to remain here and grow his roots.
“I’m in a happy place in my life in my career, and hopefully in the next five years I’ll be accomplishing my next goal,” Sykes said in the article.