Softball has much to be excited about 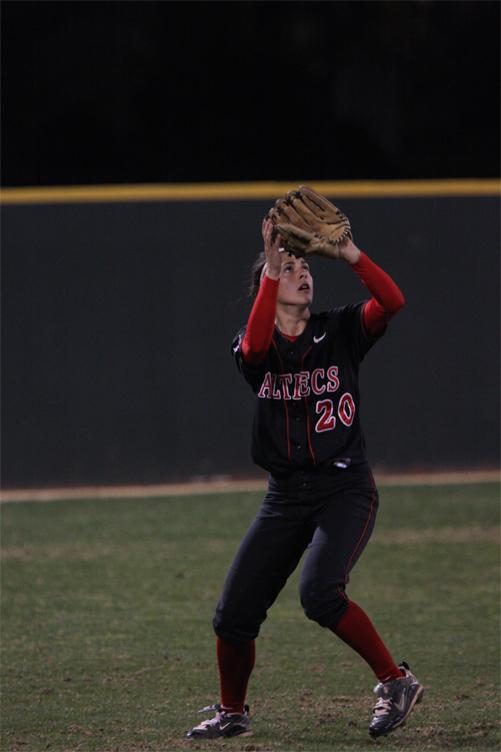 With returning 2013 Mountain West Conference Coach of the Year head coach Kathy Van Wyk, Player of the Year redshirt senior outfielder Patrice Jackson, and Freshman of the Year sophomore pitcher Danielle O’Toole, it must be hard to see further improvement for the Aztecs, right? Wrong.

The San Diego State softball team enters the 2014 campaign as the reigning MWC champions. While this team returns all of the personnel mentioned above, the 2014 Aztecs do differ from last year’s squad.

Adding maturity and a higher level of focus to a team that was second in the MWC last year in team batting average, slugging percentage and hits should have Aztec fans feeling optimistic. Van Wyk is back again for her 18th season in the Aztec dugout, and she’s glad to have redshirt junior utility player Hayley Miles back with her.

Miles, the 2012 MWC Co-Player of the Year, sat out last season due to injury. With all of these factors, it’s safe to say a third consecutive MWC title is a realistic possibility for the Aztecs this season.

There are some obstacles this team will have to address. But overall, there’s plenty of reasons for faithful fans to pack the SDSU Softball Stadium come the home opener on Feb. 13 against California State University, Fullerton.

Here’s a more in-depth look at some of the players who will make the 2014 season one not to miss.
Two-thirds will do
Look out Miami Heat: SDSU softball has a big three of its own. Between Jackson, Miles and senior pitcher and utility player Lorena Bauer, the space allotted for this article isn’t big enough to list all of the accolades and records these three players can hang their hats on. Unfortunately, it looks as if it’s going to be back-to-back seasons in which only two of the three will be in the starting lineup come the first game of the season.

There had been much anticipation about Bauer, Jackson and Miles being able to play together this spring. But after trying to break her fall in an impact play during practice, Bauer suffered what is thought to be an elbow injury.

[quote] “We aren’t positive yet, but we think the elbow dislocated,” Van Wyk said.[/quote]

When asked about how long the injury would have Bauer out, Van Wyk said, “The minimum is four to six weeks and the maximum is out for the season.”

Although the status of the 2013 First Team Easton All-American is yet to be determined, one thing is for sure: Bauer will still certainly be an integral part of this team, even if it’s just in the dugout.

[quote] “She will still be with us through her spirits and support,” Jackson said.[/quote]
Senior slugger
Jackson is back for her fifth year, after a season in which she was named the MWC Player of the Year, hit .366, homered 18 times and batted in 48 runs. She seems poised for another big year.

When asked about the difficulty of staying motivated, she quickly dismissed such a notion.

This will be Jackson’s last season in an Aztec uniform, and she is going to do everything she can to help this team win as many ball games as possible.
Anchor of the rotation
Pitching could be a question for the Aztecs. They lost 2013 MWC Pitcher of the Year Rebecca Arbino, but retained O’Toole. Van Wyk made O’Toole’s spot in the rotation clear.

[quote] “Danielle is our number one,” Van Wyk said.[/quote]

O’Toole returns to the pitching circle after a stellar freshman season and will certainly be the backbone of a very young pitching rotation rounded out by freshmen Andi Smith and Erica Romero.
Miles: ready for action
Despite not playing an inning last season, Miles was still named to the 2014 USA Collegiate Softball Player of the Year Watch List. Her numbers throughout the first two years of her career speak for themselves. A career .389 hitter, Miles already holds four SDSU records after only two seasons of play. She is versatile defensively, having seen time at shortstop and center field throughout her time at SDSU. It’s no doubt that she will be a vital part of the Aztecs’ offense in the absence of Bauer.

“Hayley is a gamer. She is intensity-plus,” Van Wyk said.
Games to mark on your calendar
Feb. 27: University of Tennessee
The Lady Volunteers are the preseason No. 1 team in the country. A win could be huge in helping the Aztecs garner national recognition.
April 25-27: Colorado State University
The Rams finished two games behind the Aztecs last year in conference play. This three-game series at the SDSU Softball Stadium is late enough in the season that it could have big-time implications in terms of who takes home the MWC title.

The Aztecs play their first regular season game Feb. 6 against Appalachian State University at the Kajikawa Classic held at Arizona State University. For a team with high expectations and studs all over the place, expect to hear a lot about SDSU softball all spring long.