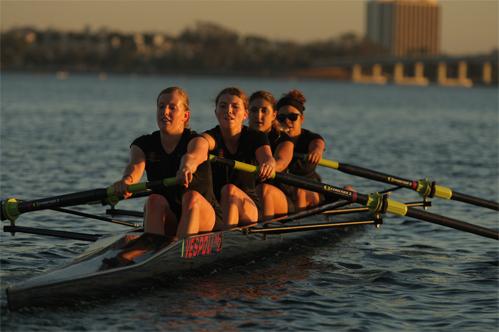 The San Diego State women’s rowing crew began its 2013-14 season this past November against UCLA. Coming off of a challenging season last year, the women of SDSU’s crew team have their sights set on a successful and fun year ahead.

[quote]“With the new coaching staff, we have been training so much harder than we ever have in the past,” senior co-captain Kate Raymond said. “It has been awesome to see the steps of improvement and I can’t wait to see what we will do this season.”[/quote]

Not only do the girls compete in various meets and competitions during the season, they also make a point to get involved in the community and at various events throughout the year. Last year the team competed and participated in the Row for the Cure event, supporting the Susan G. Komen organization.

The team also participated in the Marine Corps Combat Fitness Test, which took place this past month on campus. Led by Marine Corps officers and other enlisted personnel, the girls engaged in various fitness tests, including different running drills and activities such as combat conditioning exercises.

This season the team has made a few notable changes, including the addition of first-year head coach Bill Zack. Zack, who previously coached at the University of Portland for two years, has already begun to get the team involved in events this season. Zack said the Marine Corps event was a way to bring the team together and get them ready to compete this season.

“I thought it would be very beneficial and I think that it was a great success,” Zack said. “It was certainly a shared experience that will help the team have good team chemistry.”

Zack, along with assistant coaches Daniel Duxbury and Heather Crichton, are looking forward to the endless possibilities this season, including the fact that the team will be a member of Conference USA for the first time.

“This is the first year in which the team is a member of a conference, so the end-of-the-year regatta will be the team’s major emphasis,” Zack said. “The local San Diego Crew Classic and the Western Intercollegiate Rowing Association will be very important this season as well.”

Last year the Aztec Varsity 8 crew finished sixth place in the San Diego Crew Classic and are hoping to improve this year.

[quote]“The San Diego Crew Classic is a huge event in the rowing world,” Raymond said. “Many collegiate rowing clubs from all over the country compete at the Crew Classic, and it’s a fun time all around.”[/quote]

[quote]“The most exciting regatta of the season is the San Diego Crew Classic. It is held on our home course of Mission Bay, and it is extremely exciting to race in front of our home crowd,” Brewster said.[/quote]

This year the team has quite a few returning rowers, including both senior co-captains, sophomores Julia and Vera Brockherde, junior Cassie Wilson and sophomore Hillary Lupo, which will certainly help in the team’s experience coming into this season.