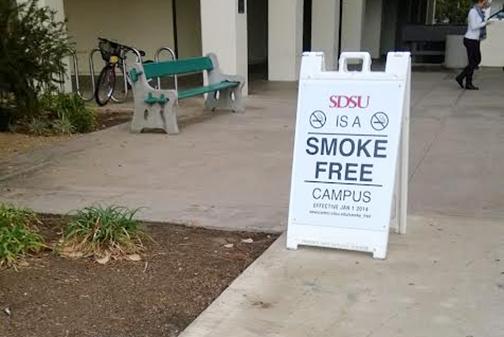 San Diego State’s campus-wide smoking ban appears grounded in common sense. After all, the dangers of smoking are well known. [quote]Nonetheless, I’m repulsed by the concept of a ban, and what it portends. That is, in the U.S., bans tend to beget more bans.[/quote]

After almost two years on campus, I can’t recall spying anyone smoking a cigarette until—ironically enough—three weeks into the smoking ban. That isn’t to say smoking wasn’t happening on campus—I see discarded cigarette butts daily—but non-smokers aren’t continuously coughing on cancer clouds as implied by the ban. After all, if you can’t find someone smoking, you don’t have a valid reason to be concerned about secondhand smoke.

My observation is buttressed by two separate studies revealing a reduction in the number of smokers in the U.S. The first, a 2008 Centers for Disease Control and Prevention survey found that only 29 percent of young men and 21 percent of young women smoke. In the second, the American Journal of Public Health wrote in a 2007 study that the previous two decades witnessed  “unprecedented declines” in the number of U.S. smokers.

University officials, though, may quarrel that approximately one out of every three college-aged men is still too many, but the reduction in play suggests anti-smoking efforts are working without the need for a ban. Additionally, a ban based on a desire to eliminate a health risk—namely, cancer—makes it too easy to begin banning anything else similarly perceived.

By way of example, consider soda, of which Americans consume an average of 44 gallons per year. Former New York City Mayor Michael Bloomberg targeted soft drink consumption because soda’s high sugar content contributed to his city’s burgeoning obesity epidemic, and obesity is a factor for diabetes. In addition, soda contains a suspected carcinogen. Linking soda to both diabetes and cancer renders it a prime candidate for store-shelf elimination. However, logic dictates that all other food and beverages linked to obesity, diabetes and cancer must also be banned. This includes a beverage long considered a better alternative to soda, fruit juice. As Boston-based pediatrician Dr. David Ludwig told CBS News, “All of these beverages are the same. They are all 100 percent sugar.”

If we ban cigarettes, and we ban soda, fruit juice and anything else containing sugar, then that leaves us with water. But the problem with water is that we mostly consume it in plastic bottles. And plastic bottles don’t biodegrade. Approximately 38 million plastic water bottles choke U.S. landfills each year. That’s clearly a problem, and cities such as Encinitas have already taken action by selectively banning plastic items. Again, this seems to be a good candidate for a ban, right?

Not so fast. Banning plastic water bottles becomes problematic when one considers the amount of plastic still left in play. Toys, computers, pen casings and seemingly everything else these days are made out of plastic. Ban those and revert back to a time when products were made out of wood (sorry, trees), metal (sorry, tetanus), and glass (ever pick shards of glass out of your feet?). A better alternative already exists—recycling. If municipalities increase recycling penalties, more residents will comply, such as when states implemented seat belt enforcement during the 1980s.

Outside of smoking—which is an expensive habit due to ever-increasing taxation—people choose unhealthy products because it’s cheaper than buying health food. A bag of chips and a corn dog at the Aztec Market retails for less than a chef’s salad and cup of fruit. A family on food assistance can buy more at a supercenter catering to high-profit, low-cost junk food than they can at a health food grocer. College students are renowned for being on a budget; thus, it follows that junk food is their dietary staple. Banning unhealthy items without lowering the cost of health food won’t make college students and the working poor become healthy. It’ll only starve them.

[quote]A starving nation can’t be preferred to a cancer-ridden nation.[/quote] Either way, it’s a sick nation. The solutions are simple: increase the viability of health food alternatives by competitively pricing it against junk food, and increase both cancer prevention and nutritional education programs targeted at communities most likely to be over-consuming sugar-laden foods and nicotine-laced cigarettes. Accomplish those items, and the U.S. becomes a model for health instead of a nation with universities promoting suppression.