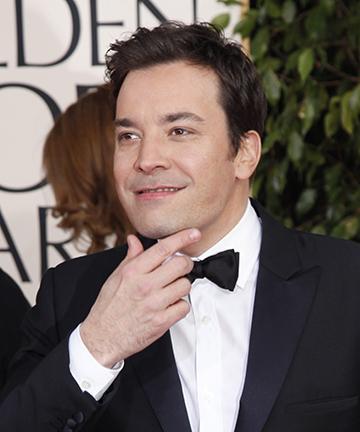 Celebrity of the Week (Bekah Haynes):

Jimmy Fallon has not only made a name for himself by having his own humorous late night talk show, but he was also recently selected by NBC to succeed Jay Leno for “The Tonight Show.” According to Eonline, “The Tonight Show Starring Jimmy Fallon” debuted to 11.3 million viewers last Monday night. His parents, Jim and Gloria Fallon, were in the audience in New York City and supported their son as they watched him make television history. Fallon had a memorable first episode with Will Smith and U2 as his first guests and several special appearances made by celebrities including Tina Fey, Kim Kardashian, Mariah Carey and Robert De Niro.

Several celebrities attended the 2014 British Academy of Film and Television Arts Awards show and after-parties. Hollywood heartthrob Leonardo DiCaprio was one of many celebrities spotted at the awards show that took place last Sunday. Brad Pitt and Angelina Jolie also attended the awards show and were seen at Entertainment One’s BAFTA After Party. According to Eonline, other celebrities that made an appearance to this after-party included “12 Years a Slave” stars Lupita Nyong’o, BAFTA winner Chiwetel Ejiofor, as well as the director, Steve McQueen.

Could it be that Miley Cyrus and Katy Perry are dating? Not likely, since Perry has been with longtime boyfriend John Mayer and Cyrus is rumored to be hooking up with 30 Seconds to Mars frontman Jared Leto. However, it didn’t stop the two from sharing a kiss at Cyrus’ Los Angles concert for her Bangerz tour on Saturday, Feb. 22. After the lip lock Cyrus confessed to the crowd, “I just kissed a girl, and I really liked it a lot,” according to Eonline.

Matthew McConaughey and his wife Camila Alves weren’t photographed kissing, but the couple was spotted leaving The Actors Studio in New York City on Feb. 20. McConaughey has been making appearances in the city to talk about his nomination for the Academy Awards, according to Popsugar. McConaughey was nominated for best leading actor for his role in “Dallas Buyers Club.”

1. This actress was a household name in the late 1990s and early 2000s. She had her breakthrough role as Bunny in “The Big Lebowski” but might better be remembered for the hit movie series with the line, “This one time at band camp…”

2. Most of us remember Lindsay Lohan playing the long lost twins in the movie “The Parent Trap.” Once the twins reunite, they set on a mission to have their parents fall back in love. Dennis Quaid played the role of the father. Can you remember what actress played the mother? (Hint: she was married to Liam Neeson)

3. This R&B singer, who passed away in a plane crash in 2001, made her first appearance on the TV show “Star Search.” However, she began making a name for herself when R. Kelly helped with the production of her first album “Age Ain’t Nothing But A Number” (Perhaps referring to her marriage at 15 with R. Kelly, who was in his late 20’s).  She ended up having several hits and appearing in movies such as “Romeo Must Die” and “Queen of the Damned.”

4. This Latin singer had women shaking their “bon bons” and “livin’ la vida loca” in the U.S in the late 1990s. Nowadays, he’s a dedicated dad to two surrogate twins named Matteo and Valentino and a gay rights activist.

5. This boy singer had a lot to live up to with his older brother being a part of the Backstreet Boys. He had a few hits such as “That’s How I Beat Shaq” and a cover of “I Want Candy.” Lindsay Lohan and Hilary Duff started a cat fight over him.