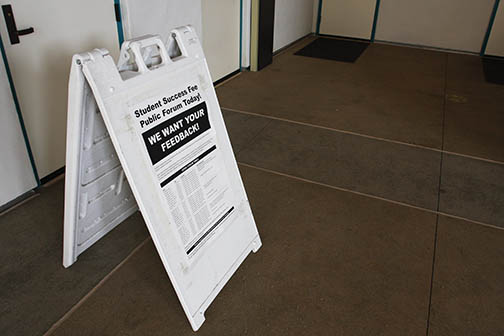 The turnout for the Student Success Fee forums has been less than ideal. Because of this, I can only assume it will not effectively serve its intended purpose. The information offered in the forums was very useful, although a bit one-sided. Considering San Diego State is trying to sell us on its idea to add between $200 and $500 to the tuition, this one-sidedness is natural.

Students who attended the forums learned that the state of California’s economy has significantly reduced the amount of money it gives to the universities every year. That money accounts for a significant portion of the university’s funding, and SDSU has decided it will try to make up some of the difference by raising student fees. The Student Success Fee forums were an opportunity for students to make suggestions about the amount of the fee, and also to educate themselves about where their tuition is going. SDSU’s decision to use an “alternative consultation process” is a noble idea. We are told that our votes will be considered, and while I don’t doubt this, the California State University chancellor ultimately makes the final decision.

[quote]Given the choice of a $200 to $500 increase or no increase, I choose $200[/quote]. I hope the state’s economic situation takes a turn for the better, but until then, higher education must be supported.

This decision puts students whose parents pay their tuition, such as me, in a strange position though. In addition to having a Student Success Fee forum, shouldn’t SDSU be reaching out to the parents of students and asking what they think of an increase in tuition? Apart from not being the main source of tuition funds, many students aren’t as willing or not as well-equipped to stay current on the economic status of their school. This was apparent in the forum’s turnout these past two weeks.

The lack of participation, however, can’t be blamed completely on the students. The forums were poorly advertised and not widely-known to students. With the nevessary resources at its disposal, one would think the school would do a better job of advertising the forums. I think it’s fair to assume the effort put into making them known to students reflects the degree to which the school wanted to disseminate the information.

One more thing makes me suspicious about SDSU’s need for more funding–the recently completed Conrad Prebys Aztec Student Union. The building cost $104 million, and reflects badly on a university asking for more funding from its students. If the university is really in financial trouble, as we were led to believe in the forums, something is adversely affecting class and academic resource availability, why did the university spend all that money on a building for restaurants, entertainment and conference rooms? I’m not very familiar with the way our school spends its money and why, but to propose an increase in tuition after building a superfluous addition to our campus seems contradictory. It didn’t occur to me until after leaving the forum and passing all the new restaurants, bowling alley, fitness center, theater and floors upon floors of meeting rooms, that the money might have gone to a more academically-oriented cause. I know there are funding restrictions, and that students voted to have a student union, but I wonder if they were presented with the same ominous information we heard in the Student Success Fee forums, because we’re all aware that funding for academics has to come first.

In any case, visit the Student Success Fee website, learn something about the school’s funding predicament, and have your voice (possibly) heard.