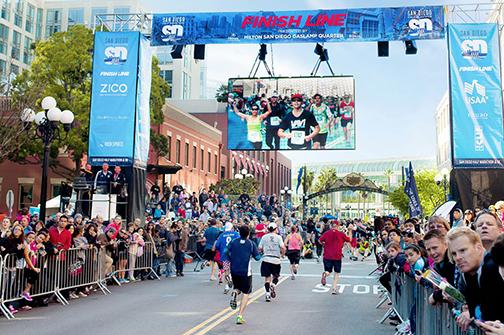 Come and check out “Celebrate San Diego at the Gaslamp Block Party” taking place in the nine historical blocks in Downtown San Diego’s Gaslamp Quarter. Located along 5th Avenue, from Island Avenue to L Street, the block party also serves as the final stretch for this weekend’s San Diego Half Marathon & 5K from 8 a.m. to 1 p.m. An event for the whole family, the block party includes a farmers market, street entertainment and a Family Fun Zone. Placed along the Marathon route, the Block Party is also a prime location to cheer on runners as they finish. Gaslamp restaurants will also offer special deals for the occasion. Enjoy another fun day this weekend in the city of San Diego.

“Turn down for what?” is a phrase known all the around now, thanks to DJ Snake. The French DJ has solidified his spot in electronic dance music with his ability to get a crowd rowdy while also delivering irresistible groovy tracks. But his range doesn’t stop there. DJ Snake also has a Grammy nomination under his belt, courtesy of his production for Lady Gaga’s 2011 album, “Born This Way.” San Diego is in for a treat, so come out to Fluxx’s IDGAF Thursday and party it up with DJ Snake.

In Japan, there’s a traditional custom called “hanami,” which means picnikcing under cherry trees in the springtime. Balboa Park’s Japanese Friendship Garden is bringing the traditional springtime celebration to this Saturday, March 8 with the ninth annual Cherry Blossom Festival. The Garden will host a variety of Japanese goodies, food, games and performances. For those 21 and up, enjoy the festival’s beer and sake garden. The festival is from 10 a.m. to 4 p.m, and the admission is $6 for adults and $5 for students. See the vendors on the festival website and stay updated on the blooming of the cherry trees on the garden’s blog.

Laugh from hilarious jokes and help a child in need, at the same time. This Thursday, March 6, The Comedy Store in La Jolla is hosting the benefit event, “Team Cohen Fundraiser.” The comedy event is in support of newborn Cohen David Allen, who has Congenital Heart Defects. San Diego comic Tony Calabrese is the headliner act for the night, and the show will also feature Mark Christopher Lawrence, Jennifer Congernaum, Maria Herman and Taylor Tomlinson. The 21 and up show asks for a $20 donation. The doors open at 7:30 p.m, and seats can be reserved online.