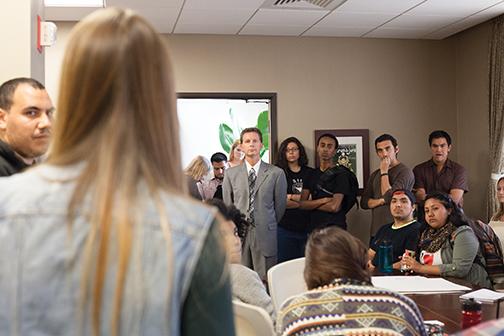 A group of San Diego State students organized in Manchester Hall Monday to voice their objections to the proposed  Student Success Fee increases with the hope of reaching SDSU President Elliot Hirshman.

Last Friday, the Campus Fee Advisory Committee voted unanimously to recommend a fee increase of $200 to Hirshman. Following the meeting a group of students stormed the president’s office to voice their concerns with the increase directly to him.

When it became clear he was not present the protesters decided to reconvene on Monday.

Many of the protesters, such as TFM and ISCOR senior Nadir Bouhmouch, were dissatisfied with the meeting and wished to speak with Hirshman directly.

“We are not here to listen to the administration once again,” Bouhmouch said.

“What we want today is an open dialogue,” Blaylock said. “I have already done my time as a student.”

“This discussion is about why dialogue is good and we’re all in agreement on that,” James said. “But if this is a neutral position for you, why don’t you put pressure on President Hirshman to not sign off on the fee increases?”

As the discussion began to turn into an argument about the goals of the meeting, Bouhmouch asked the administrators to leave the conference room so the students could plan their next move.

After some debate the protesters decided to draft a list of demands for Hirshman. The list was formally drafted by geography graduate student Jared Ramshorst after each of the four demands was voted on by a democratic consensus of the participating students.

I. An immediate meeting with President Elliot Hirshman surrounding, but not limited to, the subsequent list of demands. This meeting must occur before the final decision concerning the proposed ‘Student Success Fee.’

II. The immediate halt and termination of the proposed ‘Student Success Fee.’

III. The process surrounding future financial decisions affecting student costs, including, but not limited to, additional student fees, must be decided by a mandatory student vote through referendum.

IV. A direct response to these demands from President Elliot Hirshman by Wednesday, March 5 at 5:00 p.m.

A key element of the resolution is the mandatory referendum regarding all future student fee increases.

Women’s studies senior Jessika Seekatz proposed the idea of enforcing the mandatory process by making students submit their vote through web portal before registering for their classes or viewing their final grades. A similar policy has been used to ensure that students complete the drug and alcohol self-assessment as well as completing standard teacher evaluations, Seekatz said.

Before the protesters completed drafting their demands, Quinnan entered the conference room and announced that Hirshman had agreed to meet with a delegation of three students who represented the larger group on Thursday at 9 a.m.

The protesters are meeting again tonight at 6 p.m. in Love Library Room G to discuss whether or not they should accept Hirshman’s invitation or push for a meeting on their own terms.