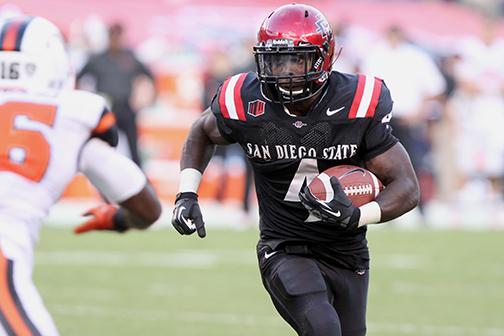 This letter to the editor is in response to “Muema takes leap of faith out of NFL combine” by Mike Heral, originally published on Feb. 26, 2014. It was submitted by Kenneth Leonard, former Opinion Editor for The Aztec for the Fall 2013 semester.

Where in the world is Adam Muema? Following his bizarre exodus from the NFL combine last week, he has apparently dropped off the map before recently resurfacing.

Following a solid junior season as San Diego State’s starting running back, Muema was not considered much of a prize in the next NFL draft. The combine was an opportunity for Muema to potentially increase his draft stock and impress talent scouts, but that’s not what happened.

By now, most of you have undoubtedly heard about Muema’s rationale behind his decision to leave the combine. According to U-T San Diego, Muema said he was “following God,” who told him he would play for the Seattle Seahawks if he missed workouts.

Mike Heral wrote an opinion column in The Aztec mocking Muema’s decision earlier this week, but I fear Heral didn’t go far enough. While he did insinuate that Muema was making a laughably poor decision, this wasn’t what caught my eye in Heral’s column or in the dialogue I’ve heard and read related to Muema’s behavior.

Heral wrote, “While some commentors questioned Muema’s ability to handle stress, others praised him for having the courage to trust his faith.” This is an accurate assessment of every discussion I’ve seen so far in the wake of Muema’s departure from the combine, and it troubles me deeply.

While I understand the romantic allure of stories where people—Joan of Arc, Moses and Ghandi all immediately come to mind—are moved by what they perceive to be the voice of God, the idea that any almighty intelligence speaks to people must be treated with ruthless skepticism. To take the notion that Muema actually is being led by a higher power seriously is patently ridiculous.

Can anyone know who or what is leading a person’s decision-making processes when that individual claims to be led by God? (Freidrich) Nietzsche famously said, “A casual stroll through the lunatic asylum shows that faith does not prove anything.” How many examples could you come up with right now of an individual or a group of people who are demonstrably wrong about something, yet they hold onto their ideals because people still take faith seriously? What reason is there, beyond faith-based nonsense, for Lesbian, Gay, Bisexual and Transgender people not to have access to the same rights as everyone else? Is there any good reason why it’s still completely socially acceptable to pray, but if someone thinks God is specifically communicating to them by spelling stuff in their alphabet soup, they might be diagnosed as a schizophrenic? Where is the line drawn between faith and mental illness?

Still, people are commenting en masse on message boards all over the Internet, both to defend Muema’s faith and to criticize those who would question the wisdom of an athlete’s decision to leave the NFL combine because God says they’ll end up playing for a particular team. I wish any other writer would publicly take the unpopular position that the idea that religious faith is somehow immune to criticism—despite both the absurd nature of most faith-based assertions and the utter lack of any supportive evidence—is a pervasive form of social psychosis. Muema’s disconnect from reality is not uncommon, and that’s what makes this whole story so frustrating.

The type of faith that drove Muema away from the NFL combine represents an event horizon beyond which rational discourse is nearly impossible. There’s just no good reason to believe in religious nonsense anymore. It doesn’t serve humanity in any way to believe that Jesus was born of a virgin, Muhammad flew to heaven on the back of a winged horse, Joseph Smith found gold tablets buried in upstate New York or that Adam Muema has been divinely appointed to play for the Seattle Seahawks, but people treat these ideas as if they had merit.

Of course, there are many in the U.S. who would argue that faith-based belief systems such as Muema’s are harmless. In his book “The End of Faith,” neuroscientist Sam Harris addresses this idea by saying, “As we have seen, there is something that most Americans share with Osama bin Laden, the nineteen hijackers, and much of the Muslim world. We, too, cherish the idea that certain fantastic propositions can be believed without evidence. Such heroic acts of credulity are thought not only acceptable but redeeming―even necessary.” Consider the faith-based justifications for terrorism all over the world. Think of the sheer magnitude of the violence throughout human history that could have been avoided if reason, instead of faith, was given top priority. While a football player’s decisions regarding his future may seem benign to most observers, Muema’s state of mind is a terrifying representation of a larger problem that plagues humanity.

The bottom line is this: It’s time to stop giving credibility to delusion and for us to get on with living our own lives as rationally as possible.