Protesters agree to meet with Hirshman 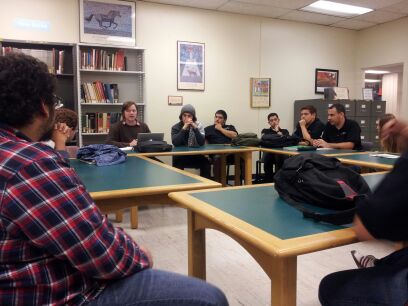 San Diego State students who previously staged a protest at President Elliot Hirshman’s office in response to the Student Success Fee proposal met again Tuesday to discuss their next course of action.

The discussion, which took place in the Chicano collection room, began with each student voicing ideas about what’s happened so far.  Many students were concerned about the request from Hirshman to only meet with a delegation of three students on Thursday morning at 9 a.m.

Some students agreed with Chicano studies junior Giovani Herrera who rejected the proposal to only meet with a select number of students.

“It is a power play from the administration,” Herrera said.

The group collectively decided the best format for the meeting would be a hybrid between an open forum and a small delegation.

The organized students nominated and elected four representatives: Bo Elder, Jessika Seekatz, Manuel Lopez and Ruth Sava to serve as moderators for the one-hour-long meeting with Hirshman, which will take place in the courtyard of the Conrad Prebys Aztec Student Union.

The invitation to Hirshman will be sent at noon on Wednesday.  All students, faculty, alumni, community members and members of the press have been invited to attend.

The goal of this protest would be to put pressure on CSU Chancellor Timothy White, who has the final say on fee decisions.