Aztecs say no to Keystone Pipeline 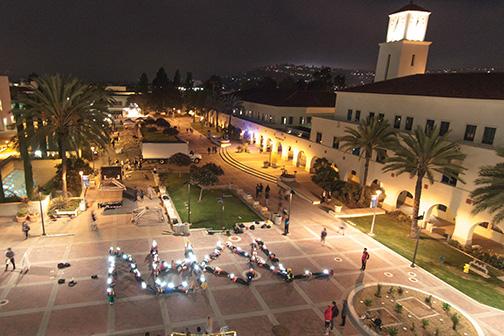 San Diego State students sent a message to President Barack Obama by laying down in front of the Conrad Prebys Aztec Student Union on Wednesday, March 5 at about 6:30 p.m. It took about 50 students gathering on the ground and waving their cellphone lights, but together they formed “NoKXL.”

Those letters are a reference to the proposed extension to the Keystone XL pipeline. According to The Washington Post, if approved, the pipeline would carry tar sand oil from Canada to refineries in Port Arthur, Tex.—a 1,664-mile project. The State Department took public comments during a 30-day period that ended on March 7. The pipeline has become a key political issue for many environmental activists in the U.S.

Jordan Wells, Associated Students sustainability commissioner, organized the aerial photograph as part of “Go Green @ the Union,” one of a series of themed days scheduled for the dedication week of the student union. Wells said members of Green Love decided to send a message to Obama about the protest because it was something they felt was their responsibility to be active about.

“We really want to bring attention to the issue,” Wells said. “It’s our future; we need to construct it without the pipeline.”

The aerial photo idea coincided with their decision to invite photographer and activist John Quigley to deliver the keynote speech on sustainability for the day’s events. Quigley, a 1988 SDSU dramatics art alumnus, said he was impressed when he was invited to speak on campus and noticed the advances in environmentalism at SDSU.

“I was so overwhelmingly impressed by all the sustainability work on campus,” Quigley said. “I’m so proud of SDSU.”

And he was willing to take his speech at his alma mater one step further.

“I’m a man of action,” Quigley said. “It’s rare for me to do a talk without action.”

Quigley, who said he strongly opposes the Keystone XL pipeline, was a timely choice to construct the message Green Love wanted to send, Wells said. According to the Spectral Q photography website, Quigley has taken more than 150 aerial photographs, in every continent, of large groups of people creating messages or images with their bodies. He said students get excited about aerial photography because it allows them to be “part of something larger than yourself.”

“It’s pretty cool having college students speak out and let the government know what we want,” Rasha Anglo, a Hoover High student taking social work classes at SDSU said, as she watched her friends form part of the “NoKXL” message.

That kind of student involvement is what makes these messages so powerful, Quigley said.

“It’s one of the tools to give voice to serious concerns,” he said. “It can’t happen without everyone’s involvement.”