Design with purpose: Form joins function at the student union 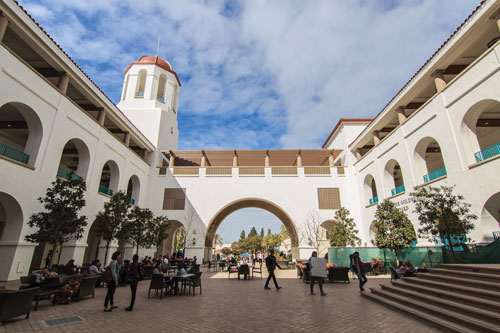 When San Diego State approached CannonDesign architects to design a student union to replace the more than 40-year-old Aztec Center, it presented them with a clear goal in mind.

“A challenge that was set out for us was to create a modern, highly sustainable building: We’re going to be (Leadership in Energy and Environmental Design) Platinum,” project principal Craig Hamilton said. “(We had) to do that with a modern building that also is reflective of, and true to, the original California mission revival architecture of the core of the campus.”

From the beginning it was clear meeting the highest levels of sustainability was going to be an overarching goal of the new structure. To achieve that meant far-reaching decisions and careful planning that permeated the entire planning process.

“The way the LEED program is set up, by the time you get to LEED Platinum you’re not doing easy things that we as architects or the engineers would do to create a sustainable building,” Hamilton said.

The planning started with where the different groups and services would be organized within the building. Most administration and Associated Students offices were placed on the western side of the building, above the Starbucks and food services. This allowed designers to maximize daylight, using a light well to bring light down to the third and second floors. The room is also ventilated, a decision made after looking at early 1920s buildings in San Diego, at a time before air conditioning. Of course, that’s in large part possible thanks to the relatively mild San Diego weather.

“We were working on the same site as the Aztec Center was, but with a much bigger building,” he said.

In order to expand the building without making it seem overwhelming, the designers took advantage of a key element in mission revival architecture. The style, prevalent across campus, was popular during the late 1800s and early 1900s. It was based on the architecture of the many missions dotting the Mexican northwest and American southwest, particularly California.

According to Hamilton, an advantage of mission revival architecture is its reliance on relatively small buildings joined together to form larger structures. Breaking the building down also made it more personal and “human scaled,” Hamilton said.

To do this, they created three separate courtyards joined by arched walkways. First is the courtyard students face walking in from the footbridge connecting campus to the residence halls. That entrance was moved to better match the bridge; in the Aztec Center students walked into a wall they then had to go around to enter campus. Now, students have the option to stay in that first courtyard, visit the main Lee and Frank Goldberg Courtyard, or the smaller three-sided courtyard on the west side, next to Starbucks. According to Hamilton, the multiple courtyards provide students with choices and variety, so they can maximize their use of the student union based on daylight, the time of year, weather and activities.

“That helps makes the scale of the building more personal and human, but also gives some variety to how people use the building,” Hamilton said.

The main courtyard turned out to be one of Hamilton’s favorite pieces of the building.

“I like the feel of the main courtyard and how it terminates the mall in the campus,” Hamilton said. “When you’re in the courtyard, with the furniture and sitting there and you look to the north, you’re up a few steps from that level, and it gives you a really nice prospect, a view that connects you back to the campus.”

On the second floor of the building is Montezuma Hall, the primary ballroom of the student union and a direct descendant of sorts of the original Montezuma Hall in the Aztec Center. However, aside from the name the two rooms don’t have much in common. While specific elements and pieces of art from the Aztec Center were incorporated into the new student union, when it came to the hall designers wanted to create something that would be memorable and unique.

“We wanted to think about the sort of grand room you might have experience in an older, traditional building,” Hamilton said. “Now, a ballroom isn’t necessarily something you’d find in a mission or mission revival architecture, but we wanted to have the room—the theater, the pre-functionary and the ballroom in particular—to have some sort of connection to the tradition of that architecture and not feel just like another hotel ballroom or a nondescript kind of thing.”

Achieving that led designers to decide to not include overhead windows, allowing users to control the acoustics and lighting of the room. They also went with terrazzo flooring, chosen because it looks elegant but is cost effective because of its durability, Hamilton said.

The planning of the student union extended beyond the visible parts most users experience. In order to keep the aspects of the services provided at the student union out of sight, there is a lower level. From there, the restaurant and services areas can be accessed through several elevators, allowing people to bring in deliveries and take out the trash without being seen by students, faculty and staff on the floors above.

Although the design and construction part of the creating the new Conrad Prebys Aztec Student Union might be complete, the new occupants are not on their own. According to Hamilton, a “building commissioning” process will take place during the next year. During that, occupants will learn how to best utilize the building, and how to adjust for changing light, seasons and needs.

For Hamilton, one of the best parts comes once everything has opened and students have begun using their new campus home.

“It’ll be really interesting to see how the students on campus embrace the building and make it their own,” Hamilton said.