Now playing: Nooner concerts and a theater at the student union 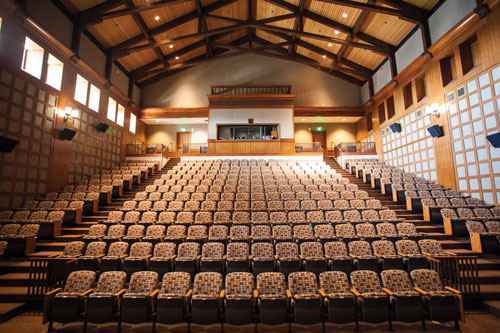 Part of the vision for the Conrad Prebys Aztec Student Union was to bring scholars, faculty, staff and administration together to enjoy the performing arts. In order to do just that, a 300-seat theater was constructed and the Nooner Concert series was resurrected.

Starting this semester, the Aztec Student Union Board will be hosting Friday Night Flicks once every month in the Union Theatre. In addition, Student Life & Leadership will present a spring film series. As weeks go on, the calendar is sure to fill up with more activities sponsored by student organizations. Basketball games have already been booked to be broadcast live in the theater. In keeping with the vision, this multi-use space was created for lectures, movies, sporting event watch parties and other live entertainment performances that would benefit from a stage and fixed-tiered seating.

According to Lorena Acosta, the Special Events Committee chair, ASUB will hold post-event evaluations to determine how many people attended the event, what went well and what improvements should be made. Engaging in this type of market research should lead to the theater’s success. Though it only has a 300 person capacity, that might lead to 300 additional people being on campus on a Friday night, coming together to be entertained.

Throughout the years, live music performances have been held during lunchtime, informally known as the “nooner” concerts. This concept has now been formalized and the Nooner Concerts have been re-established. Taking place on most Wednesdays at the Lee and Frank Goldberg Courtyard, these one-hour concerts are an attempt to focus on local bands, student musicians and acoustic sets. ASUB Music and Entertainment Chair Marin Morales explained why she’s revived the idea.

“The (San Diego State) student body has always had a love of music and the nooners provide an easy accessible, and free, way to do so,” Morales said. “Much of the student body isn’t 21 and many of the local concerts in the San Diego area are only at bars, so the Nooners hope to fill that gap. It is also a great way to feature some of the amazing local talent in the community as well as a chance to feature up and coming student musicians.”

She believes success will be measured if students ask her how they can perform on the Lee and Frank Goldberg stage and if I can get people to stop and watch on their way to the union. She mentioned one of her favorite examples of students and passersbys stopping and enjoying the live music right on campus happened during The First 9 Days at the student union series of events that took place in late January.

“Someone had stolen a cell phone (during the event) and was actually caught by the police because the thief stopped to watch the band performing that day in the courtyard,” Morales said.

In order to take advantage of who’s performing at the theatre and the Nooner Concert series, check out the student union website, and make sure you know your options for a fun lunchtime or evening on campus.