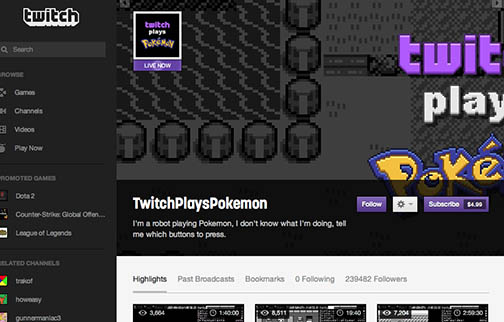 Unless you’ve been living under a rock, or some other area without electricity, chances are you’ve at least heard of the phenomenon called Twitch Plays Pokémon.

Before I go any further, allow me to elaborate. Twitch is a website where video games are streamed live. Pokémon is a part of many students’ childhood. Twitch Plays Pokémon, or TPP from now on, is more than 10,000 people controlling one Pokémon trainer simultaneously via an online chat room.

[quote]What follows is a combination of chaos, hilarity and frustration. [/quote]The stream’s success is reinforced by the art, memes and videos on Reddit and other social media sites. The result is a movement that everyone who has ever had an attachment to Pokémon should watch at least once. This social experiment has shown the vast potential of collaborative gaming.

As of now, TPP has more than 40 million views. The users have already completed “Pokémon Red Version” and it only took them more than 16 straight days—it normally takes about 20 hours to complete the game. Some of the events were even popular enough to trend on Twitter.

Now, TPP has already spent more than 100 hours in “Pokémon Crystal Version.” It’s being played 24/7 by users all around the world. Don’t despair on catching up if you’re behind; Google Docs and Reddit updates have been recording the events.

The stream itself is entertaining. There is a masochistic pleasure in cooperating with and struggling against the thousands of other players. Others may decide to troll by constantly pausing the game to hinder progress. You can always choose not to participate and read the jokes while practicing your speed-reading in the chat.

[quote]“This has got to be the most fun, yet dumbest thing I’ve ever seen in Pokémon history,” political science junior Andrew Arocho said.[/quote]

TPP has two different systems to organize the many commands. “Anarchy” is a chronologically organized line, so it’s about as anarchic as Disneyland. “Democracy” goes by the classic counting of votes with the plurality winning.

The game constantly switches between the anarchy and democracy systems and it moves at a sluggish pace no matter what system it’s working with. “Anarchy” runs the character in circles, while “Democracy” takes a long time to count the votes. “Anarchy” is more interesting, so many users despise “Democracy” more than a Soviet Union propaganda convention. However, both systems are still more productive than the U.S. Congress.

The true attraction to TPP is the community. Many comics, stories and memes have emerged from it. It has gotten so ridiculous that the game has created religions about in-game items. The most popular is the Helix Fossil, which even has an online book called the Book of Helix.

The names of many Pokémon look like a bowl of alphabet soup from a plant that only has a few letters available. BBBBBD, a Pidgey, is called Brian, which references “Monty Python’s Life of Brian.” The name was started to demonstrate the difference between this Pidgey and the other, called Bird Jesus.

It’s obviously ridiculous, but that’s what makes TPP so fun. Hopefully, more of these massively single-player online games come into existence. If more games follow, TPP will have revolutionized the way games can be played. There would be tighter communities and a wave of online creativity and memes. As long as Twitch isn’t oversaturated, more games similar to TPP would continue to entertain thousands around the world.

As a social experiment, TPP has shown the astounding amount of success and entertainment that can happen when thousands of people share the same goal. Besides the multiple failed clones of TPP, Twitch should move on to different classic role playing games such as “Final Fantasy” or “Chrono Trigger.” Of course, it all hinges on the sizes of the communities.

As of now, TPP’s viewership has significantly dropped. At its peak, there were more than 100,000 people watching at once. As of writing this story, there were a little more than 20,000. While that’s definitely a large decline, it’s pessimistic to say it’s dying. TPP is still one of the most popular games on Twitch and is definitely worth the attention.