Respect what you represent on campus 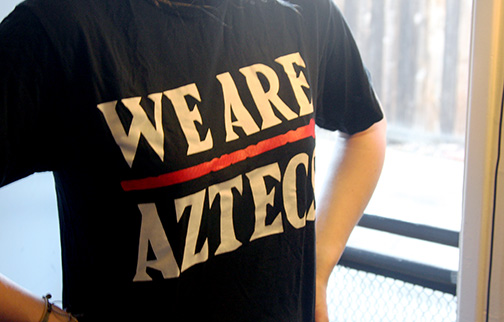 Many student organizations I’m familiar with seem to be plagued by a few individuals who have bad attitudes and even worse behavior. These people then go on to distastefully represent their groups and give their organizations a negative stereotype, which is extremely unfair to the members who uphold the organization’s standards.

“Tell me about yourself.”

Some form of this inquiry will inevitably be asked of you during an interview, a first date or a new friendship.

How do you respond?

Maybe you’ll talk about your hometown, your university, where you work, your fraternity or sorority, the clubs you’re involved with or your favorite sports teams.

These are just some examples that contribute to students’ identities, values and the types of friends they surround themselves with. However, the relationship works both ways. People use groups to describe themselves, but members also define the organizations they’re part of.

People know the groups you’re associated with, or can figure it out. This means you can’t be inconsistent in behavior, because you’re representing your organizations at all times. Unfortunately, this idea seems to be a mystery to too many students.

For example, when you post a video of yourself doing the latest drinking challenge on Facebook, people will see what organizations you’re affiliated with through your profile. When you talk loudly to your friend on the way to class about the bad news you just received from your gynecologist, the people overhearing you are immediately assuming everyone else in your organization has the same diagnosis. When you belch, swear, or act sloppy in public, people don’t see you acting carelessly; they see the organization you represent and judge it as a whole.

[quote]Some of you are probably starting to think, “Why does it matter what I do on my own time?” If you’re one of these people, the remainder of this article is for you.[/quote]

It matters because of the people who really care about your organization. The members who care are mindful of their actions because they know they’re always wearing the uniform of the groups they represent. Your bad behavior isn’t fair to them because it taints the image of the organization they work extremely hard to uphold.

Bad behavior is also not fair to the leaders of an organization. As a student leader, I can attest to the vast amount of volunteer work that goes into making an organization successful. Student leaders put their blood, sweat and tears into every aspect of organizations to ensure that things run smoothly and successfully. Without them, the group would crumble.

It’s a slap in the face and a giant middle finger to student leaders when members disregard their hard work by being discourteous.  Student leaders and participants who care for their organization’s standards loathe the individuals who seemingly strive to ruin the group’s honorable image through inappropriate behavior.

If you’re the student leader or the outstanding member, I applaud you and encourage you to keep representing your organization positively.

[quote]If you’re the troublemaker of your group, read carefully.[/quote] Don’t waste your time being a member of an organization if you’re incapable of upholding its values. However, if your organization means so much to you that you can’t walk away, it’s time to make a change.

You’re an adult, so act like one. At this point you should have better manners than the “Real Housewives of Orange County.” Use those brains that got you into San Diego State in the first place and apply them to your actions and behavior. It shouldn’t be the responsibility of the people who do care about the organization to monitor bad behavior.

Organizations aside, strive to respect yourself. Yes, bad behavior is damaging to your group, but it reflects even more negatively on you as an individual. Maybe you don’t care enough about your organization to change your behavior for them, but I sincerely hope that if you’re one of these people, you make a change because you love and respect yourself.