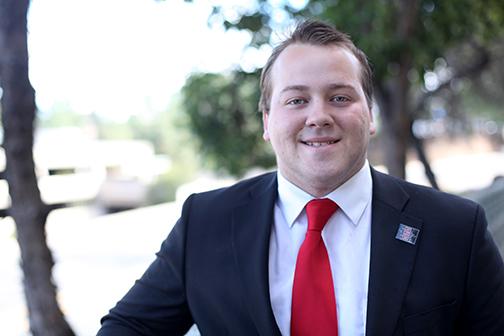 Cole said he has a vision for San Diego State and plans to unify the university by making sure all student voices are heard.

“My biggest goal is reengaging student groups on campus who feel like they have lost their identity with Associated Students,” Cole said. “Those students were a core of A.S. and brought a lot of great ideas. “

In addition to rebuilding bonds with student groups, he also plans to engage other facets of campus, such as ROTC members and athletes, who have not previously been involved with A.S.

Cole said he has shadowed the past three A.S. presidents, which has helped him develop ideas.

He plans to utilize designee positions to boards for campus club leaders to represent their organizations and build a stronger A.S. Cole also wants to establish monthly meetings with departments across campus to encourage student participation.

“In the past, we’ve had these designee spots. They’re really supposed to serve as a liaison for these executive officers,” Cole said. “We just need a little bit more follow up and reflection.”

Cole said it’s imperative for the president to be easily reachable by all students.

“The biggest thing is to be accessible,” Cole said. “You just have to be there. At the end of the day, you’re a student representative. Students are the ones who voted you in, and that’s who you serve. It’s something that might be easy to lose sight of, but my relationships with people is something that I really value.”

Cole said the student government restructuring has benefited students by expanding the government’s reach. He said he’s spotted a few redundancies in the processes, however, Cole said they’re easy to correct.

“Obviously no restructure is going to be perfect right off the bat,” Cole said. “It really promotes not just the few organizations that had seats before, but also the more than 300 organizations we have on this campus. It’s allowing more students to really be able to test the structure and really make sure their voices are heard on all levels.”

In regards to the proposed Student Success Fee, Cole said he was initially in favor of a referendum process, but after presenting at an open forum, he changed his mind in favor of the alternative consolation process.  He said the dialogue between a variety of groups and students was encouraging.

“It really allowed open conversation between all parties that were involved,” Cole said. “It’s hard to represent 30,000 students with the process. But in the past, like with the Student Health Fee, there’s only been a couple hundred students who have participated in the process, and more than 1,000 people participated this time. That’s great to see.”

Student protestors have made their opposition to the fee apparent in recent weeks, with their second demonstration taking place at the Conrad Prebys Aztec Student Union. Cole said protestors were respectful and were able to deliver a powerful message with their silence.

Cole said despite the fact that some of his close friends joined the protestors, he’s still in favor of the fee increase.

“It would put more of a toll on me as an individual student,” Cole said. “It does put a little more pressure on students, but at the end of the day, when we look at accessibility to classes and the procedure to our degrees, it make’s a huge difference.”

The candidate said he’s pro-skateboarding for the campus, and was involved in drafting legislation to allows it.

“It really comes down to suitability and culture of San Diego,” Cole said. “It’s easy for students and it’s cheap and sustainable.  I’d really like to see skateboarding on campus, because I’m really passionate about it.”

Questions have been raised since Cole’s slate of teammates are running unopposed. He said he would have liked to run against more candidates to foster the competitive nature of the electoral process. He said the conflict fluctuates with each year, and the government expansion has created more options for people to run for positions tailored to their interests.

“Competition really brings the best out of people,” Cole said. “My teammates know they’re the best for the job, but they’re going to work ten times as hard to prove that they deserve to be there.”