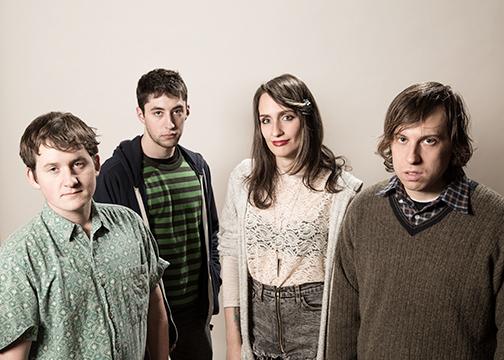 Don’t ever forget that supporting acts are worth the admission too. Such is the case for indie band Speedy Ortiz, opening for Stephen Malkmus and the Jicks at The Casbah on March 29. Speedy Ortiz shows no stopping after a fantastic debut album last year, “Major Arcana,” which landed in a series of year-end lists for 2013. The band continues to impress with its latest release, the “Real Hair” EP.

Last year, the first single by Speedy Ortiz, “Tiger Tank,” showed off what the band was all about. The blown-out guitars in the song slips and slacks out of frame like the guitarist downed a few drinks prior to recording. For their debut album “Major Arcana,” the band follows the woozy rock sound of “Tiger Tank.” In “Pioneer Spine,” the jagged pluck riffs sharply like pines and needles, while “Fun” zips through a quick run of buzzy guitars.

This February, Speedy Ortiz followed up “Major Arcana” with a four-track extended play entitled “Real Hair.” The guitars on the record are just as blown-out as “Major Arcana,” but they sound more explosive and heavy duty. The single “American Horror” has the band’s signature fuzz, but it feels more refined for a major outlet. Overall, “Real Hair” is a more grown and mighty release from Speedy Ortiz, and for an improved work to come about from the band in less than a year is impressive in itself.

While the guitars are a strong draw, vocalist Sadie Dupuis plays as the important piece for the music of Speedy Ortiz. In the songs, Dupuis sweetly slurs syllable-heavy lines in a twisted, intricate fashion.

“Criminally twisted puny little villain,” Dupuis sings in “Fun,” as she weaves rhymes like a complex rap verse. Lyrics from Dupuis don’t get more explicit than in “Fun,” but they are certainly arranged in a unique way to incite a double take.

Every Speedy Ortiz song is a wild ride, either with the sloppy guitars or the lyrical scribbles of Dupuis, often from both. When performed live, it only gets wilder as the guitars play more blown out with Dupuis’ voice slipping in between. For those already planning to see Stephen Malkmus and the Jicks, Speedy Ortiz should be a great primer. Arrive early and stick around for what the underdogs have got to offer.

Also read: Poignant country artist has nothing to hide