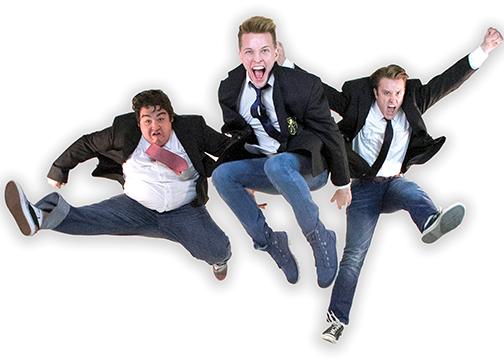 Dave Thomas Brown stars in Cygnet Theatre’s production of “Spring Awakening,” directed by San Diego State alumnus Sean Murray. Brown plays Melchior, an intellectually charismatic German student in the 1800s who falls in love with a pupil from an all-girls’ school. During a phone interview with The Aztec, it quickly became clear that Brown had the personality and the experience to play the prominent role.

He knew he wanted to be involved in theatre after watching “Cats” on Broadway.

“I was eight years old and during the sequence where all the cats come into the audience, a really beautiful cat came over to me and started caressing me and licking my face. I thought to myself, ‘if this is theater, I want to do this for the rest of my life.’ I actually got to meet the woman who interacted with me in the audience, and I thanked her for getting me interested into theater,” Brown said. “She was apparently really high during that performance.”

When asked about who influenced him as an actor, Brown mentioned that when he was younger, many adults inspired him.

“As a theatre kid, you get to be fostered by a lot of adults. I was influenced by the generosity of older actors and them treating me like an adult, not just a little kid,” Brown said. “That gave me the confidence to take acting seriously.”

“A celebrity who inspired me was Daniel Day Lewis,” Brown said. “He is so specific with everything he does. He is the most unlazy actor I’ve ever seen.”

Brown is familiar with the 19th century play that inspired “Spring Awakening,” and said the play is tonally different from the musical.

“The musical is very dark and also very hopeful while the play is very, very dark,” Brown said, “It paints a bleak picture of students who are forced to stick to the rulebook. The original source material was a great play to fill in some of the gaps of the musical.”

Brown said the Calliope Theatre Company’s production of “Six Windows Presents: a Hero of Our Time” was one of his most memorable theatrical experiences.

“It was really beautiful and a love letter to theatre,” Brown said. “I love doing work that people haven’t seen before and reinventing ways to tell stories.”

Brown said the Cygnet’s production of “Shakespeare’s R&J” was a show he really enjoyed being a part of. The play follows the lives of four Catholic schoolboys who reenact “Romeo and Juliet.”

“That made a huge impact, because the play gave the cast the opportunity to tell a classic tale in a different way,” Brown said.

There are many characters that Brown would love to play onstage, including Billy in Edward Albee’s “The Goat, or Who Is Sylvia?” He aspires to portray Matthew in “Equus” and Sebastian in “The Twelfth Night.” Noting that, his babyface might work in his favor.

“If there’s a play you want to do, you look up every theater that’s doing it,” Brown said. “Live dangerously and knock on doors. I felt I did the best work when I put my foot down and chased after something. You won’t hear about many actors getting roles by just putting headshots on a desk when auditioning. You will get work if you work hard enough.”