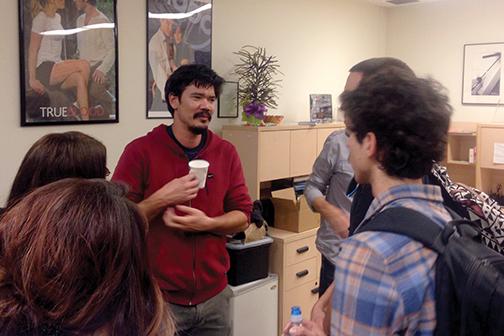 “It was something that Destin and myself wanted to do; it was just a matter of finding the right time to do it,” Najor, a producer and frequent guest lecturer, said. “When we were film students we didn’t have that many people come and talk to us that were from the industry.”

Najor has done several lecture series for film students at SDSU. The workshops provide valuable information ranging from ways to break into “the biz” to funding the first indie feature.

Cretton and Najor directed and produced, respectively, their first two features together, “I Am Not a Hipster” and “Short Term 12,” and have maintained a close relationship with SDSU.

“I always get excited to come back,”  Cretton said. “I am really grateful to this school teaching me what I was good at and what I wasn’t good at. I really discovered a lot of things about myself while I was here.”

The short version of “Short Term 12” won the Jury Prize at the Sundance Film Festival in 2009. After the success of the short, Cretton wrote it into a feature length adaptation. It won the Grand Jury Narrative Feature Award and the Narrative Feature Audience Award at the 2013 South by Southwest Film Conference and Festival.

“It’s easy to think that there’s a right way and a wrong way to get to a certain point in life, but it’s never true,” Cretton said.

“Short Term 12” follows Grace (Brie Larson), a supervisor at a foster care facility for at-risk teenage youth. It is based off of Cretton’s experiences at a similar facility he worked at before pursuing film at SDSU.

“Every movie that I make becomes this snapshot of a time in my life,” Cretton said. “It’s a story that represents the ideas and questions that I was thinking about at that time.”

“I am very lucky that I got to be a part of a movie that I really believe in the message, story and people that were trying to make it,” Najor said.

Following the screening, a small reception was held in the Dramatic Arts building where some film students got the chance to speak with Cretton.

“It helps motivate the people that question whether they can make it big or not in the film industry,” Alejandre said.

“You see different film schools like University of Southern California help each other,” Najor said. “Because they are all coming back to bridge that gap between film school and the professional world, it helps a lot of young students make that crossover.”

“Short Term 12” is available on iTunes, other on-demand venues and Netflix.