In defense of “Between Two Ferns” 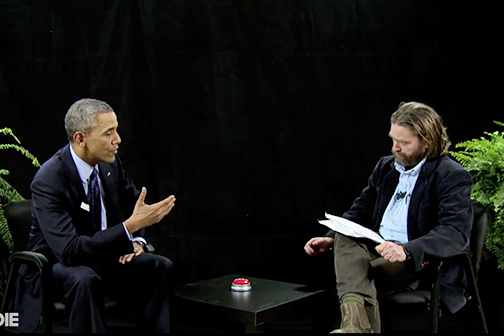 By now, you’ve probably heard about President Obama’s interview with Zach Galifianakis on “Between Two Ferns.” If not, then I question whether you’re really a San Diego State student, or if you just avoid viral videos like the plague.

[quote]With more than 3 million views on YouTube, it’s undeniable that this Funny Or Die video was popular. [/quote]However, as everything involving politics, it was swarmed with controversy. It may be worth reporting on, but it’s frivolous to complain about an Internet video.

The main dissenters were older people and Republicans. The criticisms range from claiming the video is a waste of time, that it makes America look weak and that it’s a disgrace to the presidency and that Abraham Lincoln wouldn’t have done it—though he may have if he had a time machine, which would be an awesome sequel to “Abraham Lincoln: Vampire Hunter.” I realize politics are bound to be heated, but not everything needs to be a controversy. The sad part is this reaction is to be expected. I don’t understand how people can whine about Bo, the president’s dog, or his choice of beer. It’s ridiculous to gripe about such miniscule things.

Regardless of the backlash, the video had two goals: the first was to be funny. I argue that it succeeded on that account, except to those with no sense of humor. “Between Two Ferns” has always mixed insults with awkward comedy under the disguise of an interview, Galifianakis’ specialty. They have had a consistent level of quality since the beginning and the interview with President Obama is no exception.

Both Obama and Galifianakis had great lines. Whether it’s Galifianakis asking the president, “How does it feel to be the last black president?” or Obama roasting the “Hangover,” the jokes did their job. I would even say it was toned down compared to previous episodes. There were no belt spankings, slap fights or strawberry kisses.

[quote]The second goal was to plug in HealthCare.gov, which succeeded phenomenally. The website received a 40 percent increase in traffic after the video was uploaded.[/quote] Obama agreed to do the interview to get young people to sign up for healthcare. It was a smart move considering how young people are what make the Affordable Care Act more financially stable.

The video’s success proves it wasn’t a waste of time. The claim about it disgracing the office is a gross exaggeration. Many recent presidents have appeared on late-night talk shows, including Obama, so this isn’t a first. The only difference is that “Between Two Ferns” is scripted, which some people failed to understand. Additionally, are we really going to see something this insignificant as comparable to the scandals of past presidents such as Richard Nixon and Watergate or Bill Clinton and Monica Lewinsky?

[quote]As for the more complex arguments, they are overthought nonsense.[/quote] Bill O’Reilly deserves the credit for the complaint I’m discussing, along with the previous Abraham Lincoln comment. Saying the video makes Obama looks weak to our enemies makes no sense. The whole concept is the product of xenophobic paranoia combined with an ethnocentric inclination to think America’s enemies actually care enough about a YouTube video promoting healthcare.

Besides many of the complaints not being particularly good, they’re all just fronts for not enjoying the video. It’s okay to have different tastes in comedy, but don’t make it into a bigger issue than it needs to be. If you don’t like Obama or think Galifianakis isn’t funny, that’s fine too. Everyone is entitled to their own opinion, but when people make bold claims in reaction to a comical YouTube video, it makes them into fools, not the stars of a well-plugged informational video who used the tools they had to maximize their message.