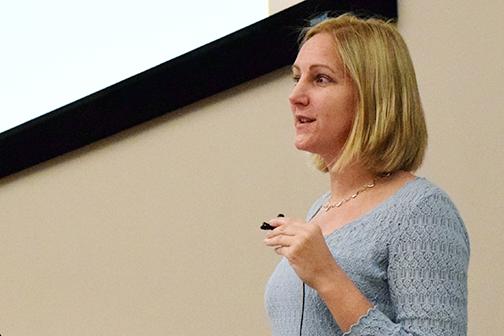 During the lecture, titled ‘Making the World’s Superpower and the Military-Industrial Complex Accountable for War Crimes,’ Gallagher spoke about holding individuals, including U.S. and foreign government officials and private military contractors, accountable for human rights violations.

“At today’s lecture, I surfaced some of the ways that the U.S., including individual officials, bears responsibility for acts that were done in our name,” Gallagher said. “We need to hold our government accountable to the people of Iraq, as well as to (U.S. military) veterans.”

As an attorney, Gallagher has worked on several cases about international accountability efforts for U.S. officials involved in torture, also known as “enhanced interrogation.”

“Barack Obama said that the U.S. won’t torture and that the era of torture is over, but I think until you have accountability (for the tortures that have happened), we as a country cannot heal,” Gallagher said.

The lecture series is held as a part of the SDSU political science 393: “Institute on World Affairs” class.

“I want (students) to have a broader political prospective on why is it that killings and atrocities keep occurring, and I want them to be exposed on a variety of different prospectives,” associate professor and Director of International Security and Conflict Resolution Jonathan Graubart said.

The lecture was part of SDSU’s Charles W. Hostler Institute on World Affairs lecture series. The next speaker, Richard Falk, is scheduled for April 7. The lectures are open to the public and held at room 242 in Peterson Gym.