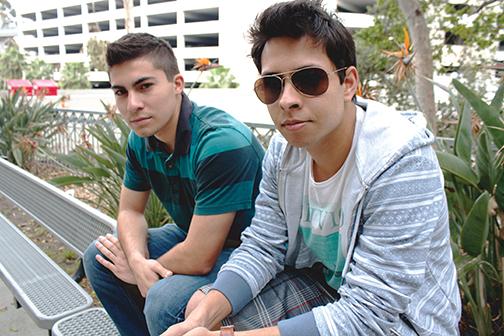 San Diego State students Michael Schenk and Alberto Sandoval met at a club meeting in 2012. After bonding over similar interests for music, the two friends formed the blues-rock band, Boondock Brothers and started performing at dive bars in San Diego.

“We were just two kids just going around downtown,” Schenk said. “A lot of experience and winning over people. It was great.”

As the two gained experience, Schenk and Sandoval picked up Shawn Peters as the bassist of Boondock Brothers. “Peters added a much needed sound to the band,” Schenk said.

Now a three-piece, Boondock Brothers focused on creating original material. After working out new songs live, the band eventually recorded its self-titled album, released in February 2013. The album showcases the band’s feel good blues-rock sound and an energetic spirit from each musician.

The three took their new songs from the album to the live stage, playing to an increasingly bigger audience at more high-profile venues. In June 2013, the band played its biggest show at Block 16 as the opening band for indie pop band White Arrows, a previous Coachella Valley Music and Arts Festival act.

Boondock Brothers takes live shows seriously. Though the band has been active for only two years, a YouTube search reveals footages of the band at many local venues, from House of Blues and a performance on KUSI’s “Good Morning San Diego.” Through these spaces, Boondock Brothers work the stage not only to improve its skills but to also impress the audience and build up a solid fan base.

“For me, it’s always so exciting to play in front of people that never heard or seen us,” Schenk said. “You have to believe in yourself in what you do. And you have to recognize there is always room to improve yourself.”

Not long after the album release, Cris Luna replaced Peters as the bassist. Schenck and Sandoval met Luna through a Craigslist ad, but the two saw professionalism and drive in Luna that fit the band. Boondock Brothers soon recorded its latest song “Didn’t Have the Time,” released in October 2013, with the new lineup. The band stepped it up to create a much leaner and more fluid sound than its self-titled album.

This March, Boondock Brothers competed and won the GreenFest music showcase. The band was chosen out of the many bands who submitted work, and the three performed to gain the most votes. The band is currently preparing to perform at the upcoming GreenFest event at SDSU in April.

Boondock Brothers looks forward to playing in front of the huge crowd at GreenFest, the biggest the band has played to so far. “The adrenaline from playing a large audience is what the band is excited for,” Sandoval said. After performing at multiple shows, the band has grown to play off the energy from its audience. The bigger and more amped the crowd, Boondock Brothers thrives to give back even harder.

Since the beginning, Boondock Brothers has worked hard to impress audiences through its genuine music no matter the platform. The band follows a rather traditional work ethic, but it’s also the classic method for success. Two years later, Boondock Brothers continues to grow and remains the local band that music fans in San Diego can proudly count on.