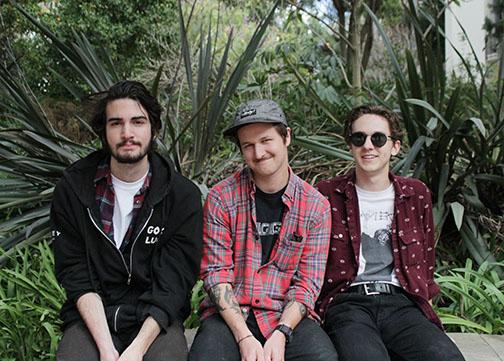 The Frights’ current hype in the San Diego music scene can be compared to that of Slightly Stoopid’s rising popularity during the turn of the century. The surf-punk band, composed of three high school friends Mikey Carnevale, Richard Dotson and Adam Lomnitzer, has been showcasing their music across San Diego since December 2012, when they were signed by Postmark Records. A mix of their personality and influences by popular Burger Record bands such as FIDLAR and Mac DeNarco has brought a little something new to San Diego.

The young talent the three friends have shown throughout their many appearances at Soma, The Casbah, Soda Bar and Che Cafe has been a breath of fresh air for San Diego music lovers. Since the surf-punk genre hasn’t gotten to the heart of San Diego as much as it has for Orange County Burger Records bands, The Frights have been able to get their name out to San Diego’s nonconformists. In about over a year, The Frights have produced two EPs and one full-length self-titled album, as well as two self-recorded music videos. Their individualism and  “no expectations” attitude has given them a fun and mischievous reputation on stage, which fans love.

Make sure to check out upcoming videos and records coming out by The Frights and support local San Diego local bands.