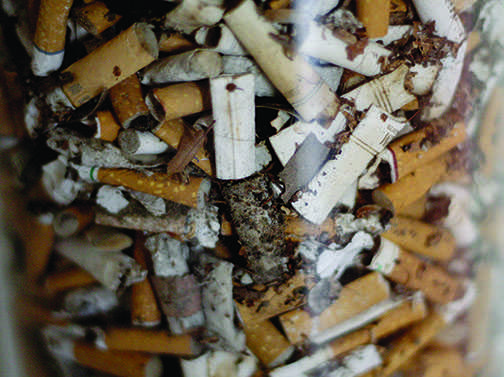 The latest annual cleanup of cigarette butts led by Associate Director for Border and Global Health Thomas Novotny has shown the immediate effects of the recent smoking ban at San Diego State, which was implemented at the beginning of the year.

Students and faculty discovered more than 100,000 cigarette butts during the course of four years since the cleanup’s inception in 2010. The team found 18,903 cigarette butts this year, as opposed to the 19,147 found last year – a difference of about 250.This year, the group expanded the clean up to the parking lots where more people have been observed smoking in those areas.

Novotny has been a part of the cleanup since its inception. He said it’s too early to see the effectiveness of the ban, because people haven’t assimilated to it as the standard yet and many of the butts were probably left over prior to the ban.

“What we’re trying to do is achieve a different sort of norm,” Novotny said. “There’s nothing normal about smoking. It does sound like we’re trying to tell people what to do, but smoking is an extraordinarily bad habit on campus; it’s not good and we’re trying to teach people good life skills. There’s really less and less tolerance of smoking, socially as well as in the job market. It’s bad for our campus, society, healthcare system – every individual who picks it up.”

Sociology senior Christopher Lara-Cruz is the vice chair of the A.S. University Affairs Board. He said the ban may not be as effective as planned with only social enforcement. A new location for smokers should be provided as a means of finding a middle ground.

“I think that any ban of any sort of a behavior that is considered deviant but not illegal is not going to work, especially since the university allows drinking on campus in the residence halls for those that are 21 and over, but grown adults are not allowed to smoke cigarettes,” Lara-Cruz said. “There is also a history in the country that prohibition doesn’t work – two perfect example would be alcohol prohibition and the failed war on drugs.”

Lara-Cruz said that A.S. sent out a survey to students in regards to the ban and a majority of responses came back in favor of it. Only about 2,500 out of 30,000 students responded, however, and so the survey was not representative of the campus as a whole.

California State University, Fullerton has a similar policy to the smoking ban policy here at SDSU. Implemented in August 2013, Cal State Fullerton engages in its own social enforcement, cited as community enforcement, according to the Daily Titan. Students around campus declared themselves “Fresh Air Advocates” and actively promote awareness around campus of the smoking ban.

Cal State Fullerton’s Director of Media Relations Christopher Bugbee said their campus smoking ban was a response to a community request and is simply a matter of enforcing community norms.

Novotny said the SDSU ban is not an attempt to inhibit the rights of individuals, but a way to protect public property, similar to maintaining a state park or beach.

“There is no reason the campus should be filled up with cigarette butts. There is no ‘right’ to smoke, but you can still smoke many other places,” Novotny said. “This is a campus provided by taxpayers. There is not a right to foul up the environment.