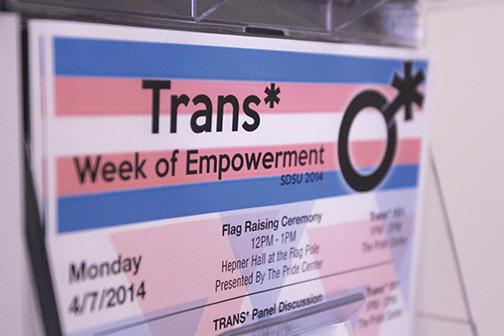 On April 7, San Diego State kicked off its first Trans* Week of Empowerment to bring positive visibility to the transgender community.

The event was inspired by Trans Day of Empowerment, a national event that began in San Diego in 2011. Members of SDSU’s Queer Student Union began planning for the event during the winter break. After consulting with the school’s LGBTQ advisory board, the coordinator of the Pride Center suggested transforming the event into a weeklong event.

The goal of the event was “to make sure transfolk on campus feel like their campus community is supporting them and for the mainstream campus community to see that this campus is in support of marginalized people,” event organizer and QSU President Thomas Negron said.

“A lot of players came together to organize this event,” liberal studies and LGBTQ Studies senior Negron said. “We’re really excited to be able to collaborate and put on so many events to bring awareness to this community.”

The goal of the event was to further educate SDSU about the trans community.

“For this community, I think it’s something that has been largely silenced,” Negron said. “We see a lot of the focus in our community has been on gay men, sometimes lesbians, sometimes other sexualities, but really transfolk have been largely silenced due to biases and ignorances, and to start shifting that we have to make sure we’re pushing for events like this to bring awareness to the community at large.”

Event organizer and history graduate student Ashley Tiffany-Furuya, who identifies as genderqueer, hopes the week of empowerment will shed light on difficulties transfolk may have on campus.

“My pronouns are they/them/their’s, and I get that a lot people haven’t had a lot of exposure to different types of pronouns that you can identify with,” Tiffany-Furuya said. “What that’s doing is allowing folks to understand that this is my identity and this is how you can honor it, and this is how you can be aware of how we typically gender police people – we assume genders and we project people’s identities without really asking them. That kind of awareness is really important to me.”

The week of empowerment included events from many different organizations, beginning with the Transgender Flag Raising Ceremony on April 7. In addition, several SDSU Community members spoke about their Trans* experiences and the importance of Trans* visibility at SDSU, according to their Facebook page. On April 8, a Trans* Panel Discussion Forum was held by Safe Zones at SDSU, and a screening of the documentary “Trans” was hosted by QSU on April 9.

On April 10, WOA held its annual Take Back the Night event. The week of empowerment concluded with QPOCC’s The Trans*-centric Day of Silence tabling event to raise awareness about the Day of Silence and it’s relationship to Trans* People of Color.  Along with individual events, The Pride Center also held a daily Trans* 101 workshop to further educate and create awareness about the trans community.

Negron estimated there were about 100 people at each event, which he credits to the support of professors and the largely student-run nature of the events.

“I think that it’s going really well, taking in consideration that this school has never experienced or put on something at this level on this topic. Over time, I’m sure it will grow,” Tiffany-Furuya said.