Learning about ‘The Fifth Beatle’ 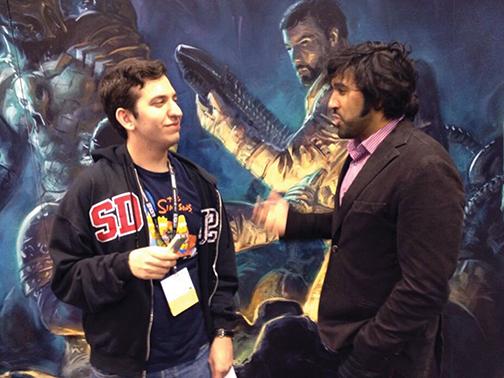 Vivek J. Tiwary is the writer of the graphic novel, “The Fifth Beatle,” and a producer of many successful plays and musicals including “American Idiot” and “The Producers.” He will be writing the script to the film adaptation of his acclaimed book. Tiwary answered questions at WonderCon about his many accomplishments, the relevance of his work and answered if he ever met the living members of The Beatles.

The Daily Aztec: How did you become a producer?
Vivek J. Tiwary: I was born in New York City and my parents were huge lovers of the arts. Ever since I was a little kid, they took me uptown to see ballet, opera, Broadway, etc. When I got older, I went downtown to places such as CBGB and The Ritz. I got to see early punk rock shows and early Sonic Youth. I grew up loving all the arts, not just avant-garde stuff, but also the fine arts and theatre.

My Grandfather was a successful entrepreneur and a big influence on my life. He always said “you need to do what you love and you need to work for yourself.” I wanted to apply that to arts and entertainment, since that’s what I love. Producing seemed to me to be the element where I can have my hands on a little bit of everything in really creating a show.

The Daily Aztec: What led to you pursuing a career as a graphic novel writer?
Tiwary: My dad was a huge comic book fan. I often said that I probably learned to read by reading comics. I’ve always wanted to write a graphic novel and when I decided to tackle the Brian Epstein story, my first thought was theatre, because that’s what I had done the most of.

As I thought about how I wanted to tell the tale with fantasy sequences and color palette thinking made me feek that the correct medium was graphic novel and film.

The Daily Aztec: What attracted you to the story of Brian Epstein?

Tiwary: While I was in business school, I realized I wanted to be an entrepreneur in entertainment. I thought that I should study the lives of the great entertainment visionaries. Being a lifelong Beatles fan, I thought that The Beatles and Brian Epstein rewrote that rulebook.

Initially, I was looking for a business case study. I wanted to know how Epstein came up with the suits for the band, haircuts and how he got them on “The Ed Sullivan Show” I unintentionally ended up uncovering the human side of the story and it ended up striking a deep cord for me. He was gay in a time where it was a felony to be homosexual. He was also Jewish, and there was a lot more anti-Semitism in the country then. Another disadvantage for him is that he was from Liverpool, and prior to The Beatles, Liverpool had no cultural influence.

He was the ultimate outsider, and I felt a little bit like that myself. I’m of Indian origin and am not pursuing the typical fields that we are shepherded to like engineering, technology and medicine. I never would suggest that I had the obstacles that Brian had. Compared to him, I’ve had a very blessed life. However, I could relate to that sense of wanting to do something that certain kinds of people don’t do and dreaming big dreams. That’s what really stuck with me over the years.

The Daily Aztec: Have you met Paul McCartney or Ringo Starr?

Tiwary: I worked with Ringo Starr. I was at Mercury Recordsyears ago before I started my own company (Tiwary Entertainment Group Ltd.) I worked on Starr’s album, “Vertical Man.” I’ve never met Paul McCartney in person, but we have been in touch. I’m very proud to say he is a huge fan of the book. He wrote a letter saying how much he was moved by Andrew Robinson’s art in the story. I should mention that Andrew just got nominated for an Eisner Award for “Best Painter/Multimedia Artist (Interior Art). It was also nominated for “Best Reality-Based Work.”

The Daily Aztec: Who has influenced you as a writer and producer and why?

Tiwary: As a graphic novel writer, there have been so many. Kevin Eastman and Peter Laird, the creators of the “Teenage Mutant Ninja Turtles,” are people I’m huge fans of. Chris Clairemont and his run on “X-Men” was a defining moment in my life. I also look up to Neil Gaiman, Frank Miller and Alan Moore.

The Daily Aztec: Any advice for SDSU students pursuing writing or the arts?

Tiwary: My biggest advice is just do it. Don’t wait around. Don’t wait to get a job. Don’t try to get someone to finance your project. Find a way to raise whatever money you may need to get a project off the ground. It is easier than you think, if you’re passionate about it. To me, the message of the Brian Epstein story is to chase your dreams, and if you believe in your dreams passionately and with a ton of persistence, you can realize them no matter how crazy they are.