Chegg turns a journalism student into a leader 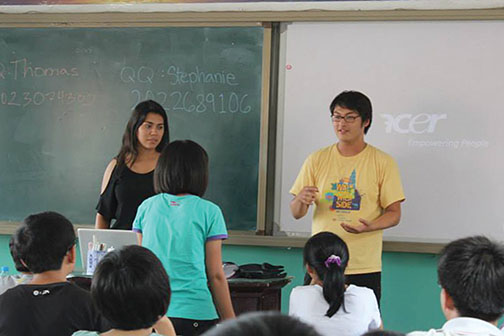 Journalism and media studies senior Stephanie Rivera loved the idea of exploring another country and immersing herself in a different culture, which is why she applied to the Chegg and Pencils of Promise internship.

Textbook retailer Chegg partnered with Pencils of Promise to create a 10-day internship for eight students in two exotic locations. For the first five days of the internship, students will spend time in New York City learning how the nonprofit Pencils of Promise works and operates. The remaining five days will be spent in a Guatemalan village, where the interns will help build a school for an impoverished community.

“Chegg creates long-term relationships with interns and makes sure to set them up for success,” Chegg’s Director of Event and Cause Marketing Heather Hatlo Porter said.

Rivera first learned about the internship after purchasing books from Chegg. She received an email showcasing the internship opportunity and was immediately intrigued.

“It kind of just fell in my lap,” Rivera said. “I read the details and thought it was very interesting because last summer I volunteered to teach kids in China and thought if I could do that again, that would be amazing.”

A supportive professor at San Diego State encouraged Rivera to go to China, which was a life-changing experience. Rivera also studied abroad during the summer of 2012 and currently interns at the Foundation for Women, a nonprofit organization that promotes the participation and leadership of women in philanthropy. She said the combination of these experiences opened her eyes to the different types of people in the world and made it clear that working with nonprofits is something she wants to do for the rest of her life.

The opportunity to travel once again to do good is something Rivera didn’t want to pass up.

[quote]“I don’t want to be sheltered to thinking one thing,” Rivera said. “It’s important for your own moral values and it makes you a compassionate person because you stop judging.”[/quote]

When talking about her experience in China, Rivera said the hardest part was choosing what to teach to the kids. She was only there for 10 days and had to determine what would benefit them most.

“The last day we were there the children gave us gifts and flowers, and I had to keep telling myself, ‘don’t cry,’ because the kids changed my life and didn’t even know it,” Rivera said.

Taking all she learned from her internship in China, Rivera began the Chegg internship application process.

The applicants had to submit a photo of themselves helping their community or environment with a caption of 140 characters or less describing the picture and why they wanted the internship. More than 1,000 people submitted photos. Then 50 semi-finalists were chosen to make a 90-second video explaining why they deserve the internship, and the public voted for its favorite. The 16 applicants with the highest number of votes were personally interviewed and eventually eight will be selected to receive the internship.

Though the application process toward the internship has been a long one, Rivera has already created a new friendship with a fellow applicant through Instagram and they have been supporting each other along the way.

[quote]“Even if it doesn’t work out I have gained so much out of it already,” Rivera said.[/quote]

With the support of her family and friends Rivera has had the opportunity to broaden her life experiences, and she said being awarded this internship would only add to that. Through her experiences Rivera has made friendships all over the world and is enthusiastic about the idea of traveling to Guatemala.

“This is a tremendous learning opportunity and a way to help developing nations,” Hatlo Porter said.