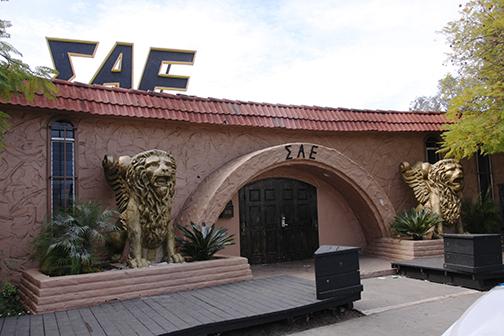 A recent policy change banning the traditional pledging process for all national Sigma Alpha Epsilon fraternity chapters has stirred controversy about the effectiveness of the elimination. San Diego State officials and fraternity members have commented that it might be an overarching trend for the rest of the Greek system, though some have their doubts about how it may play out.

According to a statement released by SAE’s national headquarters March 7, the wide-ranging change was instituted to “to protect Sigma Alpha Epsilon’s future” and to get rid of a class structure between new members and active members. The statement also addressed recent negative publicity.

“The bad publicity Sigma Alpha Epsilon has received is challenging and regretful because we know that some of our groups have great new-member (pledge) programs and do the right thing,” the statement read.
The numbers:
In the past eight years, at least 10 deaths of SAE members have been linked to hazing, alcohol or drugs, according to Bloomberg, which called SAE the most deadly fraternity. In the past four years, two SDSU  students and SAE members have died, one from an overdose. The second death is still under investigation. There have been more than 60 fraternity-related deaths overall since 2005, Bloomberg reported.
The reactions:
Associate Vice President for Campus Life and SDSU SAE Adviser Timothy Quinnan addressed hazing and fraternity-related violence at SDSU, saying that although it occurs, it takes place at a lower rate than other similar-sized institutions.
“Is hazing a concern at SDSU? Absolutely,” Quinnan said. “Does a year go by that we don’t have reports of allegations of hazing? Absolutely not. But just because the rates are lower, that doesn’t mean it’s a good thing. Our goal is zero hazing. One instance of hazing is too many.”

Current SAE President Nick Wright was a member of a committee that spearheaded the decision to get rid of the traditional pledge. He explained the benefits of the policy swap, saying it detracts from the potential for a negative environment within the fraternity created by the previous hierarchical membership system.

With the new process, new members will now have full rights within 96 hours, as opposed to the months-long initiation process, Wright said. A member education program will be instated for each year in the fraternity, so the learning experience continues until the members leave the fraternity.

“Right now, there’s a lot of chaos with the older members and it’s just about going through this transition process,” Wright said. “Once we get through the next four years, take away this whole two-tiered system and get through all the legal issues with hazing recently, I think it’s going to really help out and make our fraternity a lot more productive.”

SAE joins the ranks of 75 other national non-pledging fraternities, one of which is housed at SDSU. Sigma Phi Epsilon President Patric Kreidler said the system has been successful with eliminating hazing and hierarchy.

Quinnan expressed his doubts about the new member process, calling it a risk.  He said other members of the Greek community view the move as radical.

“Pledging has some stigma associated with it,” Quinnan said. “My guess is that nationals, in a preemptive step, decided if we reduce this pledge process from weeks, if not months, to four days, the length of time where someone could get hurt or hazed is greatly shrunken. That’s what the motive is – it’s about managing risk and liability. I think it’s a calculated risk, and it could turn out either way.”

Quinnan said the changes will be seen most during the fall semester, though he said a single semester will not be an accurate gauge. He said other fraternities may be skeptical about imparting similar rulings upon their own organizations, speculating that most other frats will take a “wait and see approach” before weighing on any policy changes. He said many fraternities pride themselves as unique entities and may not conform simply because of another frat’s decision.

Wright said many alumni are balking at the policy change, and older members may have trouble adapting. Wright detailed his own pledging process, saying it helped acquaint him with the culture of the fraternity.

“When I went through (pledging), it gave me a different view than the new members will have now,” Wright said. “I really looked up to the older guys, and knew that they earned their respect in the house, and now it was time for me to earn mine. I think the only thing that’s really going to change is that they may have a sense of entitlement.
The alumni:

Former SAE member Michael Boyle  graduated from SDSU in 1972. Boyle pledged into the fraternity when he was a sophomore in 1968.

He took part in a semester-long pledging process, with weekly meetings and other activities to educate pledges about the history and secrets of the fraternity. He remembered the weekend he was finally initiated.

“Ridiculous things that were funny happened, like a phony ring, and we’d all have to freeze and raise our right hand and say ‘Hark hark’ with sacred peacock calls,” Boyle said.

“Guys have a certain sense of humor,” Boyle said. “It’s a certain bonding you go through. But there’s also kind of a fine line, and some people don’t respect the line, and they go over it. Then, it can turn into something like bullying.”

Boyle said the eradication of pledging may alter the culture of the fraternity, but he said banning pledging may be the right move to deal with the potential for incidents of bullying or hazing.

“We have leadership that’s concerned and it sounds like there are some unacceptable things that have been happening in other parts of the country, but they’re stepping up and addressing things,” Boyle said. “There’s no fraternity that’s perfect, that’s for sure.”

Boyle was part of a board of alumni who worked with the national chapter to usher the SAE house off campus following questionable behavior in 1991. He said the chapter was ousted for five years before returning as a fledgling with new members in later years.
The history:
Anthropology Department Chair Seth Mallios, who is also considered a campus historian, said Greek life was introduced to the SDSU campus in 1921, and became instantly popular. In 1971, the Interfraternity Council was created to help set limitations on fraternity and sorority involvement and refocus students on academics.  The first recorded hazing was in December 1939, 18 years after the inception of Greek life on campus.

Two fraternities were allegedly branding initials into the faces of pledges using silver nitrate. Both were suspended from campus privileges for one semester, forced to pay doctor bills for injured students and make a public apology, Mallios said.
“Who am I to judge? But I would say that now, the majority of Greek life isn’t centered around chess tournaments and tea parties with faculty,” Mallios said. “How did they go from having chess tournaments with faculty to putting chemicals in people’s faces in a matter of 18 years? That’s a pretty quick evolution.”
Mallios also approached the topic of hazing from an analytical standpoint. He said hazing can turn into a cyclical practice in organizations, as a mode of revenge for other members’ past experiences.

“There is a power dynamic and there is a right of passage people go through in the hazing process,” Mallios said. “I’m not justifying any kind of hazing at all, I’m just saying that every culture on the planet has hazing that is part of the initiation rites. There are symbolic ways to replace literal hazing. You can put someone through ritual death, you don’t have to actually kill them.”

Amidst mixed reactions and skepticism about the change, Wright said the positives outweigh the negatives about the process.

“I think it’s going to be a much different culture, especially if it spreads to other fraternities,” Wright said. “It would help to take away from some of the negative images of fraternities.”