Doo-wopping pharaoh sits down with the DA 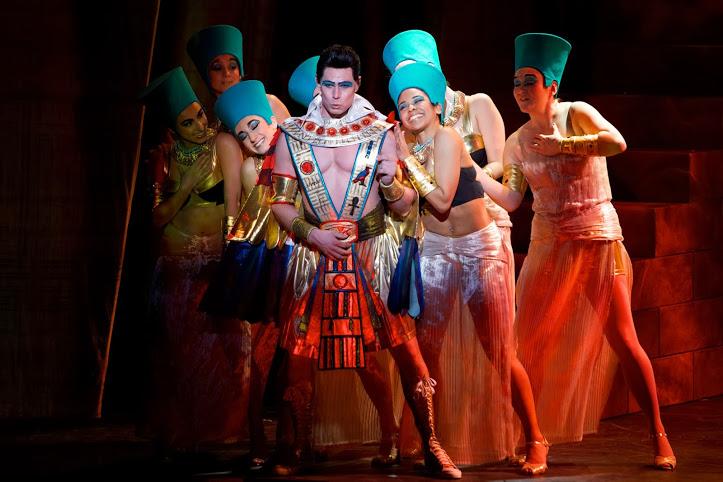 Ryan Williams has been featured in several big musicals in the past, including the original Off-Broadway cast of “Evil Dead: The Musical” and a touring version of “Les Miserables.” He will be playing the Elvis-inspired-Pharaoh in a new production of “Joseph and the Amazing Technicolor Dreamcoat” at the Civic Theatre. Williams opened up about his character, Andrew Lloyd Webber musicals and working with “American Idol” singers, Diana DeGarmo and Ace Young.

The Daily Aztec: Tell readers a little bit about your background and what lead to you pursuing musical theatre as a career?

Ryan Williams: I grew up as a son of an air force officer. My family and I moved around a lot. We would move every two years. My mom would put me in after-school drama groups because I wasn’t good at making friends early on in life. I seemed to really excel in those groups. I went to school for musical theatre since it was the one thing I was passionate about, and I’ve made it a career ever since.

The Daily Aztec: As the Pharaoh, what is the secret to emulating the spirit of Elvis Presley?

Williams: I think first and foremost, it’s to respect him and not make fun of him. His voice is very recognizable and he was such a charismatic force of nature. When paying tribute to him, you have to be as relaxed as he was onstage.

When I told my dad that I wanted to continue taking singing lessons as a kid, there were not a lot of opportunities on an air force base. My dad was also a huge Elvis fan and he gave me a lot of his Elvis records. He told me that if I wanted to learn how to sing, I should imitate him.

I became a huge fan of Elvis. A lot of work that I have done professionally comes from an Elvis background. I played Conrad Birdie in “Bye Bye Birdie.” Danny Zuko and Kenickie from “Grease” are very Elvis influenced. Even Stacee Jaxx from “Rock of Ages” has an Elvis-like persona, though the music is different. I can talk for days about Elvis.

The Daily Aztec: How is it like working with “American Idol” singers, Diana DeGarmo and Ace Young?

Williams: Honestly, they are probably the nicest couple I have ever met in my life. They are two of the most genuine and humble people and they are really the rock of the production. I have never heard them complain, even when things were really tough during tech rehearsal or extremely long days. Young and DeGarmo were always very encouraging to everybody and kept the mood light and positive. I cannot say enough positive things about them.

The Daily Aztec: What are some of the most memorable shows you have been a part of?

Williams: There really is no greater feeling than getting to the third hour of “Les Miserables,” people call it the “walk down.” This is during the big finale. As performers walk to the center of the stage, they can see the audience being visibly moved and affected by the show deeply.

I was an understudy for the role of Enjolras and being a part of the song “One Day More” was a dream come true. “Joseph…” has been incredible as well, because kids who have performed in school productions and have memorized the musical numbers inside and out and are so happy to have seen a professional production. Knowing that they might be inspired to become performers is gratifying.

The Daily Aztec: Are there any Andrew Lloyd Webber musicals you would love to work on in the future and why?

Williams: I have always been a huge fan of “Evita.” Musically, it is one of his best scores. I was just listening to it on the bus ride from San Jose to Los Angeles. I was reminded of how cool and complex it was. I am not a Spaniard, so I doubt I will ever be cast in the show. I am also a huge fan of “Sunset Boulevard.” I think the role of Joe Gillis is a very fun one. I have to mention that “Starlight Express” is a guilty pleasure. I love rollerskating and rollerblading, and a dream of mine would be to play the character of Greaseball. I might be getting a little long in the tooth for that.

The Daily Aztec: What theatre characters do you hope to play in the next couple of years and why?

Williams: My fiancée is in “Rocky The Musical” on Broadway. Playing Rocky Balboa would be a killer role to do, but I do not think I can play it. Andy Karl is doing an amazing job. Depicting the fictional boxer is a huge challenge, and I think it is beyond me. As I get older, there are roles like Sweeny Todd that I would want to portray in regional productions.

The Daily Aztec: Do you have any advice for San Diego State students pursuing musical theatre?

Williams: Stay positive and focused on the goal. Do not get caught up on negativity or rejection. Acting is always about the work and the joy that you get from it. For musical theatre, remember that singing, acting and dancing are all equally important, especially in the twenty-first century.

Photo courtesy of Daniel A. Swalec