“I Believe” chant is not SDSU’s to keep 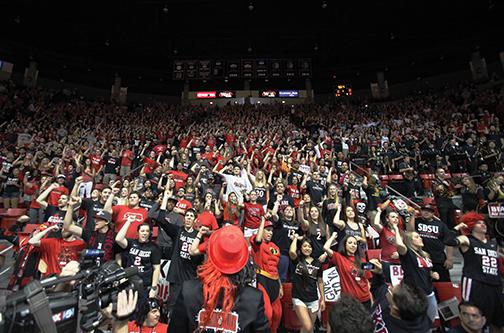 By now, most know that Aztec Shops wants to trademark the “I believe we will win” chant. This idea is as misguided as President Barack Obama who, during a July 2012 campaign speech, told business owners they didn’t build their businesses. The U.S. Patent and Trademark Office should provide the correct context for that phrase this time: You can’t have it because you didn’t create it.

It’s absurd that a non-creator can “own” an intellectual property. Jay Rodriguez is the only one who should trademark the chant. If you aren’t familiar with Rodriguez, he created the chant while attending Naval Academy Prep School in 1998, 13 years before Aztec Shops applied for the trademark. Since he didn’t protect it, no one else should be entitled. It’s as ridiculous as me owning the catchphrases made popular by George Lucas in his “Star Wars” movies.

It’s ironic that San Diego State, whose staff and students comprise Aztec Shops’ board of directors, expels students for using someone else’s work, yet see nothing academically dishonest from using Rodriguez’ call-and-response chant for profit.

An argument for Aztec Shops trademarking the phrase is this: It’ll be iced out after another institution protects it. It’s a compelling concern since other entities want the trademark. After years of using the chant to spur our Aztecs to victory, it’ll be a shame if we can’t buy an “I believe” shirt because a stuffed shirt writes chants in the style of a legal brief.

But it’s also a shame to silence other student bodies. Turning Aztec Shops into an aggressive protector of a chant used nationwide earns SDSU more enmity than profit. SDSU is still reeling from being known as both a party school and as “STDSU,” but does it mind being known as “SDS-sue”? SDSU should be concerned with people stealing its research, not what is silk-screened on a T-shirt.

Another counter-argument reads like this: Other universities trademark peculiar items unrelated to academia. For example, Texas A&M University owns the “12th Man” term symbolizing a boisterous fan base. Texas A&M actively enforces its trademark, most recently by forcing the NFL’s Seattle Seahawks into an agreement. The difference, though, between what it does and what Aztec Shops wants to do sends this argument back to the concept of content creator. Texas A&M created its protected term whereas the Aztec Shops fosters a desire equivalent to being the socially awkward boy lucky to have his crush’s bottle pointing at him.

I hope the Aztec Shops publicity stunt spurs the federal government into tightening trademark eligibility rules so that only content creators are eligible for protection. Then Aztec Shops can concentrate on what it does best: charging a lot for textbooks and tchotchkes.

Read the “pro” argument for trademarking the chant here.