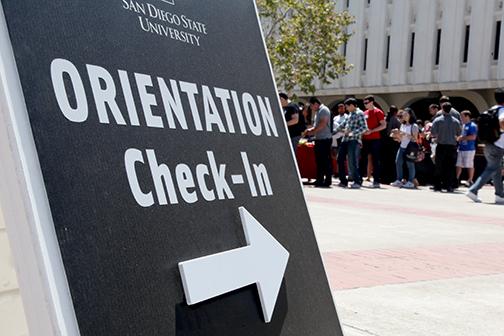 This fall semester, San Diego State received a record number of undergraduate admission applications and admitted 8,000 of the applicants.

The new undergraduate students include 5,000 first-time freshmen and 3,000 transfer students. According to SDSU NewsCenter, the average freshman admitted held an average high school grade point average of 3.69 and a SAT score of 1114.

The new Aztecs all have their personal reasons for choosing SDSU.

This fall semester is also the first semester at SDSU for business management transfer Patricia Trahin, who transferred from Southwestern College after three years.

“My goal is to adapt and be successful by my senior year,” Trahin said.

In addition to the new undergraduate students, SDSU also admitted 2,300 graduate and post-baccalaureate students for the fall semester.

A mechanical engineering student working on his master’s degree, Alex Grassi began his first year of the program Monday.

Born in Baltimore, Grassi received his bachelor’s in physics from Pennsylvania’s Franklin and Marshall College. He moved to San Diego about a year ago to train at the U.S. Olympic Training Center at Chula Vista with the men’s national field hockey team.

“SDSU is the cheapest and they gave me a grant, which is really awesome, so I decided to go here,” Grassi said. “It’s the closest to the training center as well, so it’s great.”

Aside from doing well in his first year at SDSU, Grassi said he is thinking about starting a field hockey club on campus.