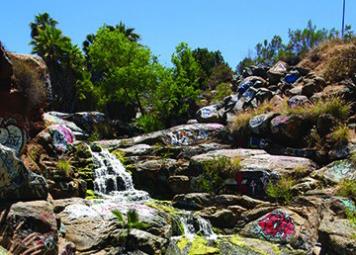 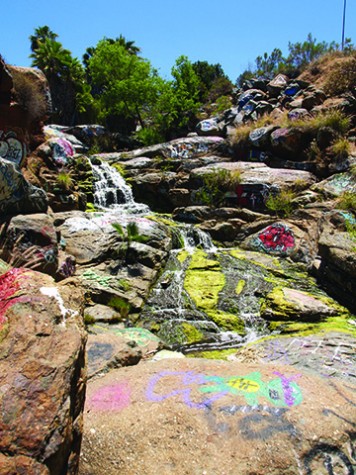 The Adobe Falls waterfall, located across the Interstate 8 and owned by San Diego State, has become an increasingly popular destination for individuals taking part in prohibited activities.

According to SDSU Police Department Captain Josh Mays, there have been three medical airlifts from the site in recent weeks and there has been an increasing number of citations issued to individuals trespassing the private property. Often, the incidents are alcohol or drug related, he said.

There have been 44 citations issued to date for trespassing the property, Mays said. No alcohol citations have been issued.

The biggest bust so far was an incident involving a group of 40 individuals who were cited and/or removed from the property, Mays said.

Officers have been patrolling the area and responding to calls from neighbors.

“We respond to calls for service, so if we receive a call, we go, resource permitting,” Mays said.

Jay Wilson, president of Del Cerro Action Council, the area’s community council, said neighbors have expressed frustration with the hike in noise, trash and traffic in the area.

Since June, SDSUPD has started what Mays called an “educational campaign.”

Mays said SDSUPD has been making verbal announcements by helicopters and alerting individuals of the dangers and trespassing laws by posting signs near the entrances and placing fliers on vehicles parked nearby.

During this process, officers give a first warning and collect the individual’s information for SDSUPD’s database to track who they have contacted before. Citations are not regularly issued during the first warning, but the issuance of the citation is up to the officer, Mays said.

“During our educational campaign we try our best to educate before taking enforcement action, but that is not always a guarantee,” Mays said.

The waterfall, which creates a natural pool and hike, is accessed from both sides of the I-8: north of the 1-8 and west of College Avenue near Adobe Falls Road and Mill Peaks Road, and from south of the 1-8 through an old aqueduct pipe that goes under the interstate from SDSU.

SDSUPD has requested that the pipe be removed, and Mays said a work order has been initiated.

Mays said most of the students seem to be high school students and are not SDSU students. He believes individuals have learned by word of mouth about the location of Adobe Falls, including how to access the area.

“I’ve been very impressed with their response and the commitment.” Wilson said of the SDSUPD.

Wilson said about 25 people attended the cleanup, in which a 50 gallon trash bag full of spray paint cans was collected.