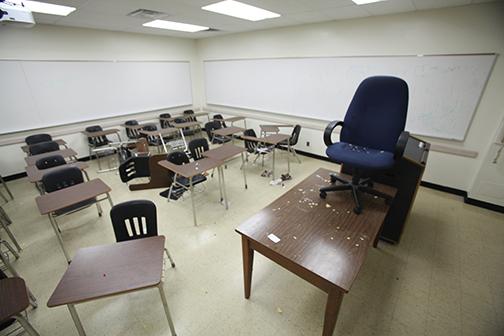 A man found naked Sunday morning was taken to a mental health facility after vandalizing the second floor of the Education and Business Administration building.

Graffiti was in a total of seven rooms, a swastika was drawn on a bathroom’s trash can and a white board on the door of a classroom read, “Death to nihilism.” A fire extinguisher was also discharged.

San Diego State Police Department Captain Joshua Mays said the 53-year-old man called 911 and asked to see a doctor regarding his medications. He said the incident is not considered a hate crime and no criminal charges are being pressed.

Mays said the man told SDSUPD he was “fighting for a cause,” but he did not specify what his cause was.

He said SDSUPD asked the man a series of questions to determine his mental state. The man was sporadic and inconsistent with his answers, so police decided to transport him to a mental health facility. He said the man met the criteria for an involuntary psychiatric hold through Section 5150 of the California Welfare and Institutions Code.

“He met the criteria because he was a danger to himself or a danger to others,” Mays said.

Mays said no charges were pressed because of his mental status.

“If he went in there and was not mentally ill, he would have been arrested,” Mays said.

The man was taken to County Mental Health, a facility for mentally ill or mentally unstable individuals who do not have health insurance or are not actively seeking help from a doctor, Mays said.

The man was a Santee resident and has no connection to the university.

The building is accessed on weekends with an access card, which can be authorized for administrators, graduate students, researchers, janitors and others. Mays said the man could have possibly entered the building though a door that wasn’t secure or after someone with access let him in without asking questions.