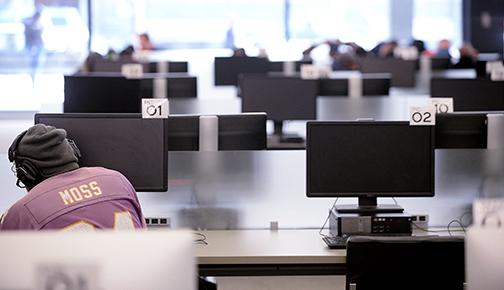 As far as technology is concerned with San Diego State, there’s a lot to be desired. The WiFi always seem to fail at the worst times and the worst offense has to be the poor variety of computers.

This is most evident in the library, which has only PCs, but there are some classrooms suffering from the same ailment. There are some classes that only have Macs. It’s ridiculous how SDSU doesn’t combine the two together to appeal to students’ preference.

It feels the same as mispronouncing an easy word or walking around campus naked while holding a club. You end up looking like an unsophisticated caveman who doesn’t know how to work a computer. I shouldn’t have to question if my mouse’s scroll ball is broken, or if Macs just don’t scroll down for whatever reason. It shouldn’t be puzzle to figure out how to use spell check.

I’m not trying to say PCs are better than Macs (although I can make a convincing argument) because it generally boils down to personal preference. Therefore, this would obviously have to go both ways. Going off observation alone, there is a major Mac-favoring population at SDSU. So the room that only has Macs would need to get PCs, and the library that only has PCs would need to get Macs.

If someone is using a school computer in general, then they’re most likely pressed for time and learning how Windows 7 or Linux works is an unnecessary complication to whatever they need to do. It’s more than a little annoying readjusting to command keys or feeling restricted without the ability to right click.

It wouldn’t kill the department making these decisions to have a little variety in classrooms requiring computers. With the exception of some computer classes requiring a certain type, either types could basically do the same thing with an experienced user. At most the school could just shuffle computers around until they achieve an acceptable balance.

Admittedly, Macs and PCs are more similar than different. You’re not being introduced to a completely foreign technology. There’s still a learning curve for each system like driving stick after driving an automatic for five years. It will take some time.

We pay thousands of dollars every semester to attend SDSU, therefore, we deserve to use computers regardless of the brand. It’s a matter of accommodating to those with different preferences. Sure, it’s not technically necessary, but neither is having left-handed desks.

Some people like the streamlined simplicity of the Mac, while others prefer all the menus, headaches and freedom associated with a PC. When placed in a situation where you have to use a school computer, wouldn’t it be best to choose one you’re accustomed to? Unless you have something against choices, the answer is yes.