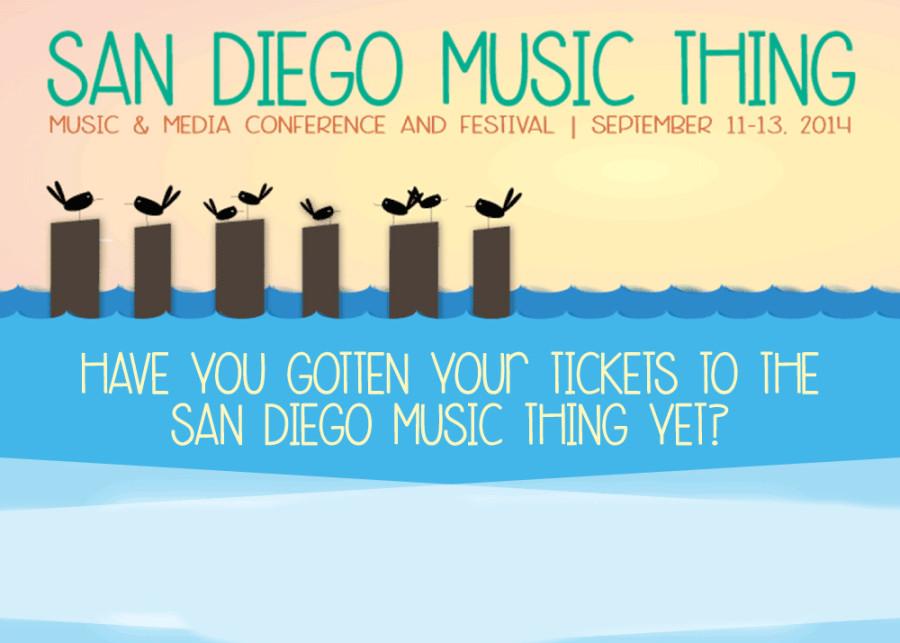 Heads up, music fans: the San Diego Music Thing returns for its seventh year this weekend on Sept. 12 and 13. Similar in concept to Austin’s South by Southwest, the two-day event welcomes all music enthusiasts and those aspiring to get into the music industry. Each day begins with a music and media conference at the Town and Country Resort. For the night portion, several shows take place at various North Park venues, both 21-and-up and all-ages.

The producer behind SDMT is the San Diego Music Foundation. From youth education to hosting the San Diego Music Awards, the organization has provided tools and opportunities to help the members of the local music community succeed. SDMT is one of its ways to offer professional insight and development for those who want to work in the music industry. The foundation coordinates every internal aspect of SDMT from inviting speakers, promotion, and booking shows and hotels, amongst others.

For the inside scoop and business know-how, SDMT’s daytime conference provides a wealth of resources. The scheduled panels dealing with hot topics such as building your fanbase, PR tactics, and tips for music bloggers. The speakers are pros in journalism, management and songwriting from numerous outlets, such as San Diego Songwriters Guild and Warner Bros. And break time between talks sets up a great opportunity to chat with the speakers or make friends with other attendees.

For the panel topics, SDMT asks local and national musicians about any emerging topics interesting to them, SDMT Executive Director Marjy Taylor said. The foundation asks for feedback with the speakers about the changing trends in the industry, such as musicians profiting from YouTube, to keep the topics timely.

Along with accredited media members, the SDMT invited three banner-name musicians as featured speakers. The biggest name is EDM headliner and big-time producer Moby, and he’s scheduled to talk on Saturday. On the same day, SDMT welcomes Swamp Dogg, who’s been recording big-hearted R&B since his 1970 solo album “Total Destruction of the Mind.” Jack Grisham of Huntington Beach punk band True Sounds of Liberty will talk on Sunday. He also recently chronicled his rough times of a long career in his 2011 memoir “An American Demon: A Memoir.”

Many other activities will take place during the conference. The Vinyl Junkies Pop-Up Shop will be open on Saturday for any vinyl needs. Live musicians will perform throughout the day at the Day Stage of the hotel for both days. Of course, many exciting bands such as Liars and Cults will play later on the night at various venues. More than just a talk, San Diego Music Thing provides fun as well as important resources for you to succeed in the music industry.