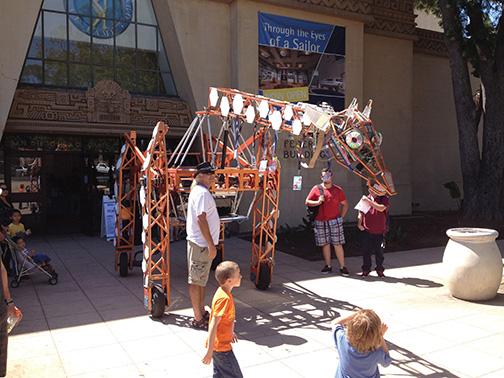 San Diego State engineering students along with robotics enthusiasts and industry professionals gathered at the San Diego Hall of Champions on Saturday for the Robo Expo.

The event was hosted in part through a collaboration between SDSU’s Exploring STEM Careers Initiative and the San Diego Science Alliance. The goal was to introduce students of all ages to science, technology, engineering and mathematics (STEM).

SDSU grad student Gene Rayford is one of the engineers who helped set up some of the hands-on projects for younger students.

“The basis of our project is to show people that anybody can get involved,” Rayford said. “We’re showing students that it doesn’t matter what age they are.”

One of the projects Rayford works on is an underwater mini-submarine, which students can control from outside the water. For aspiring scientists, the mini-subs provide a more tactile introduction to STEM subjects than a tradition classroom setting.

Greeting visitors as they entered the expo was Russell, a fully functional robotic giraffe. Standing at 18 feet when his neck is fully extended, this mechanical animal was built to scale. His head is able to move gracefully back and forth and he can walk backwards and forwards while carrying up to 30 people. Russell is equipped with a full set of anatomically correct, flashing neon teeth that resemble the exact number and placement of teeth in a real giraffe.

Lindsay Lawlor is the designer and creator of the electric giraffe. He says kids are always more engaged in learning when they can physically interact with the material.

“You can explain to (kids) how gears work all day long, but the moment you put the gears in their hands, the lights come on right away,” Lawlor said.

Russell was a hit among the younger kids but the expo also featured more technically sophisticated robotics. SDSU’s Mechatronics Club featured their self-driving submarine, which is designed to navigate an underwater obstacle course without remote control. It competed against submarines from other schools this past summer.

Mechanical engineering senior Austin Owens is founder and president of the club. He and his team put in an incredible number of hours designing and building the underwater machine.

“The last month right before the competition I put in about 18 hours a day for a straight month just trying to get this sub up to speed,” Owens said.

The robo-sub project is a combination of sophisticated computer programming along with mechanical and electrical engineering.

From interactive projects to advanced robotics, the Robo Expo showcased a diverse variety of automatons. Dave Massey is the robotics program education manager for the San Diego Science Alliance, an organization affiliated with the San Diego State Research Foundation. He’s also the event organizer for Robo Expo. Massey said the thing that surprises him the most about the event is the large number of younger kids in attendance.

“I think the age group of our demographic really is aware of robotics and its importance in society … and robots are just fun,” Massey said.